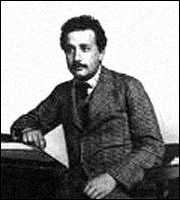 Albert Einstein recalled 1905 as the year when, he said,a storm broke loose in my mind.Get ready to feel the effects of that storm throughout 2005. WarnsHarvardUniversityprofessor of physics and Einstein expert Gerald Holton,Theres a typhoon headed our way.

In 1905 while working as an obscure patent clerk inBern,Switzerland, Einstein published three papers in the prestigious journal Annalen der Physik that earned him a Nobel Prize, introduced the worlds most famous scientific equation, and laid the foundation for modern physics. In celebration of the centenary of what historians call Einsteins annus mirabilis (miraculous year) universities and governmental bodies are staging a dizzying array of celebrations, conferences, concerts and lectures.

Physicists have titled their observanceThe World Year of Physicsand the U.S. Congress has endorsed that term. The United Nations General Assembly is calling its celebrationThe International Year of Physics.InBritainandIreland, it is simplyEinstein Year.

At Notre Dame, the Department of Physics, the History and Philosophy of Science Program, theKanebCenter, theDeBartoloCenterfor the Performing Arts and other campus organizations will host a variety of lectures, conferences, workshops and performances to mark the centenary. The observance opened the first weekend of Februarywith a lecture by physicist John Stachel, founding editor of the collected papers of Einstein, and the 2004-05 meeting of the Joint Atlantic Seminar for the History of the Physical Sciences. It will draw to a close Sept. 9 with a program of music and poetry set to images from the Hubble Space Telescope.

Don Howard, director of the Universitys History and Philosophy of Science Program, points out that, although Einstein held a doctorate in physics in 1905, he was unable to find employment in his field and worked in the patent office as a means of supporting his wife and young son.

He was not a complete unknown, in that he had several reviews and papers published in der Physik , but there was no indication of how outstanding he would become,Howard said.

The most famous of Einsteins three 1905 papers dealt with his special theory of relativity, which revolutionized thinking about space and time. The paper defined our modern understanding of the workings of the universe and unveiled the famous E=MC² squaredequation, the basis for nuclear power and atom bombs.

A second paper, on photoelectric effect, helped develop our modern understanding of light. Einstein argued that light behaved as if it were composed of particles, rather than the waves that most physicists thought. In 1921, Einstein received the Nobel Prize in Physics for the paper, which provided the foundations of quantum mechanics.

A third paper concerned Brownian motion, the motion of minute particles. Einstein showed that this motion is caused when the particles collide with atoms or molecules, thereby providing the first direct evidence of atoms.

Any one of these papers would have made a career, but to have three of them appear in such a short time was truly remarkable,Howard said.

In addition to those qualities, Howard cites Einsteins enduring interest and involvement in the philosophy of science.

At the age of 16, he was not just reading, but comprehending the major philosophers, such as Kant,Howard said.He was unusually reflective about questions of science and involved himself in debates about the philosophy of science. It was a habit he carried with him throughout his life.

Charlie Chaplin once said to Einstein,The people applaud me because everyone understands me, and they applaud you because no one understands you.The centenary of Einsteins miracle year is an ideal time to better understand the man who revolutionized our concepts of energy, light and time.