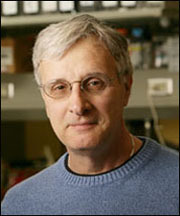 Francis J. Castellino, Kleiderer-Pezold Professor of Biochemistry and director of the W.M. Keck Center for Transgene Research at the University of Notre Dame, is the recipient of the 2008 WYETH-ISFP Prize for outstanding contributions to the field of fibrinolysis, proteolysis and thrombosis.

Castellinos research focuses on the mechanism by which the human body forms and dissolves blood clots. Among a number of important finds, he has established the mechanism of plasminogen activation, a key function of the bodys formation of the enzyme that dissolves clots. Along with its scientific importance, his research bears directly on the treatment of heart disease, strokes and hemophilia.

Castellino is an elected fellow of the American Association for the Advancement of Science and of the New York Academy of Sciences. He has served as a member of the editorial boards of the Journal of Biological Chemistry and Biotechnology and Applied Chemistry and is a former member of the Biomedical Sciences and Hematology Study Sections of the National Institutes of Health (NIH).

Castellino also has been the recipient of an NIH Research Career Development Award and a Camille and Henry Dreyfus Teacher-Scholar Grant. He was awarded honorary doctorates from the University of Scranton in 1984 and the University of Waterloo, Canada, in 1994.