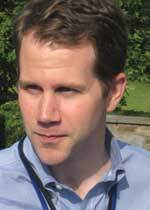 Mark Huffman, M.D., a 1998 University of Notre Dame graduate and a cardiology research fellow at Northwestern University Feinberg School of Medicine, will present at the Global Health Colloquium on Aug. 25 (Wednesday) at 4 p.m. in Room 283 of the Galvin Life Sciences building at Notre Dame.

Huffman, who recently spent nearly a year in India as an NIH Fogarty International Research Fellow, will speak on “A New World Order of Heart Disease: Trying to Telescope the Transition in India.”

India is in the midst of a public health transition common among developing countries, Huffman says. According to a theory of epidemiologic transition developed in the 1970s, medical issues shift as societies advance in ways that allow people to live longer. The results of poor diets and bad habits such as tobacco use leave many with heart disease, lung disease and diabetes where such basic issues such as maternal-child and infectious disease had been more prominent. In India, Huffman says, “poor rural parts are still battling measles. Other parts like New Delhi that are wealthier have plenty of heart disease, diabetes, etc.”

Other countries, including China, Brazil and parts of sub-Saharan Africa are at a similar stage in development, he says. A two-pronged approach can help. The population approach uses public health measures such as tobacco taxation to reduce consumption and food-manufacturing regulation to reduce sodium in the food supply. The high-risk approach screens the population for individuals who are at particularly high risks for diseases and treats them aggressively with medicine as well as lifestyle changes.

“You need that combined, complementary approach to really address the problem,” Huffman says, adding that access to primary care is critical, and India has a poor distribution of physicians with a surplus in cities and shortages elsewhere.

Rather than focusing on a particular disease such as heart disease alone, Huffman aims to promote changes that can improve other conditions as well. “That’s why I try to focus on things like tobacco and primary care,” he says. “These will have benefits above and beyond heart disease.”

Huffman seeks to find solutions that cut across different fields.