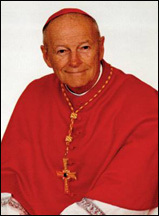 Cardinal Theodore E. McCarrick, archbishop emeritus of Washington, D.C., will be the principal speaker and the recipient of an honorary doctor of laws degree at the University of Notre Dames 163rd Commencement exercises May 18 (Sunday) in the Joyce Center arena on campus.

For many years, Cardinal McCarrick has loyally advised, assisted, supported and inspired our University community,said Rev. John I. Jenkins, C.S.C., Notre Dames president.He was an indispensable participant in our recent and joyful celebration of the beatification of Blessed Father Basil Moreau, whose witness paved the way for Notre Dames foundation. He once said that he would love to have met Father Moreau, and that he counted himself among our founders friends. We certainly count Cardinal McCarrick so, and look forward to celebrating his membership in the Notre Dame family.

Cardinal McCarrick presided at a Mass of thanksgiving at the beatification ceremony in Le Mans, France, in September for Blessed Father Moreau, founder of the Congregation of Holy Cross, Notre Dames founding religious community. He also spoke on campus at a conference in January organized in celebration of Father Moreaus first feast day.

Cardinal McCarrick served from January 2001 to May 2006 as archbishop of Washington, a position that includes serving as chancellor of The Catholic University of America and president of the Board of Trustees of the Basilica of the National Shrine of the Immaculate Conception.

As archbishop of the nations capital, he placed an emphasis on vocations, education and meeting the needs of new immigrants.

In Washington and previously in Newark, N.J., he established seminaries to educate diocesan missionary priests. These two seminaries in Kearny, N.J., and Hyattsville, Md., prepare diocesan priests for work both at home and abroad. In June 2006, Cardinal McCarrick ordained 12 men to the priesthood, the largest ordination class in the Archdiocese of Washington since the 1970s.

In 2004, he supported creation of the DC Opportunity Scholarship Program, a federal initiative that gives low-income families the option of choosing a public or non-public school for their children. The program has led to Catholic schools in the District enrolling some 1,000 scholarship recipients. The cardinal also initiated plans that led to the creation of a new Catholic high school – the first in D.C. in decades – in the fall of 2007.

During his five years as archbishop, Cardinal McCarrick oversaw the start of a multi-cultural and social service center in Wheaton, Md.; the establishment of a Lay Leadership Institute in Silver Spring, Md., which focuses on the Hispanic community; and the reorganization of four of the archdioceses social service agencies into one entity, Catholic Community Services, which assists more than 120,000 people annually.

Cardinal McCarrick, who was archbishop of Newark for the 14 years prior to his appointment in Washington, also has been a leader in international human rights, justice and peace issues. He has headed the U.S. Conference of Catholic Bishops (USCCB) committees on migration, domestic policy, aid to the Church in Central and Eastern Europe, and international policy. For the Vatican, he has served on the Administration of the Patrimony of the Holy See, and on the pontifical councils for promoting Christian unity, justice and peace, pastoral care of migrants and itinerant peoples, and Latin America. He continues to serve on the board of Catholic Relief Services and as chairman of the CRS Foundation.

In service to the nation, Cardinal McCarrick was a member of the Secretary of States Advisory Committee on Religious Freedom Abroad and the United States Commission for International Religious Freedom.

A native of New York City, Cardinal McCarrick attended Fordham University and St. Josephs Seminary, from which he earned bachelors and masters degrees in history. He was ordained to the priesthood by Cardinal Francis Spellman in 1958, and he went on to earn a second masters degree in social sciences and a doctorate in sociology from The Catholic University of America (CUA).

Prior to his appointment as archbishop of Newark, Cardinal McCarrick served in administrative positions at CUA, as president of the Catholic University of Puerto Rico, in several positions for Cardinal Terence Cooke in New York City, and as the founding bishop of the Diocese of Metuchen, N.J., in 1981.

Cardinal McCarrick, 77, was one of the 115 cardinals who participated in the conclave that elected Pope Benedict XVI in April 2005. He speaks five languages: English, French, German, Italian and Spanish.