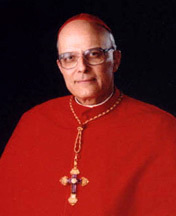 A theological conference specifically designed for undergraduate students will bring Cardinal Francis George of Chicago and other speakers to the University of Notre Dame March 31.

The conference,Christ is Risen!So Now What?has been organized by the Center for Liturgy and the Notre Dame Vocation Initiative (NDVision), which held a similar conference on vocations for undergraduates last year.

We thought it important to assist and encourage theological discussion of issues of personal concern to undergraduates,said David W. Fagerberg, director of the Center for Liturgy and one of the conference organizers.In this conference, which will take place a few days after Easter, we want to address what appears to be a false dichotomy between those who pray and those who actthat is, between the student drawn to a contemplative retreat and the student more inclined toward service and pursuing justice.We wish to show that both these demands of Christian discipleship have their source in the empty tomb.

The conference will consist of three presentations, all in the ballroom of the LaFortune Student Center.

Joan Neal, executive vice president of U.S. operations for Catholic Relief Services (CRS), will speak onA Life of Serviceat 4 p.m.A graduate of Loyola University in Chicago, Neal holds a masters degree in pastoral studies and a certificate in biblical spirituality from Catholic Theological Union.She directs CRS domestic programs and advocacy, overseeing six regional offices across the country and working in partnership with dioceses, parishes, colleges, universities and other Catholic organizations.Before joining CRS in 2002, she was president of her own management consulting firm whose clients included Catholic agencies, dioceses, organizations and parishes in the Midwest.

Rev. Cyprian Consiglio will speak onA Life of Prayerat 7:30 p.m.Father Consiglio is a musician, composer, author, teacher and monk of the Camaldolese Congregation. For 10 years, he lived at New Camaldoli Hermitage near Big Sur, Calif., serving as liturgist, choir director and teacher. Deeply interested in comparative religion, he frequently visits India to study and teach.He divides his time evenly between his home in Santa Cruz, Calif., and travel for performing, teaching and leading retreats.

Cardinal George will speak onEaster: The Font of Prayer and Serviceat 9:30 p.m. A native of Chicago, he oversees the second largest Catholic archdiocese, after Los Angeles, in the nation. Recently elected president of the American bishops conference, Cardinal George has taught in several seminaries and served as vicar general of the Oblates of Mary Immaculate, the religious order to which he belongs.He holds masters degrees in philosophy and theology from Catholic University of America and the University of Ottawa, respectively, a doctorate in American philosophy from Tulane University and a doctorate in sacred theology from the Pontifical Urban University in Rome.