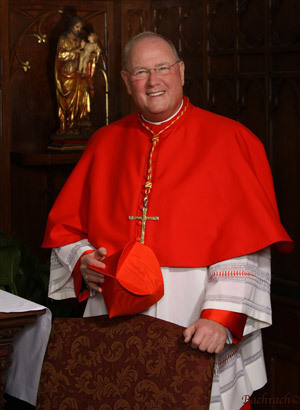 Cardinal Timothy Dolan, archbishop of New York and president of the U.S. Conference of Catholic Bishops, will be the principal speaker and the recipient of an honorary degree at the University of Notre Dame’s 168th Commencement Ceremony on May 19.

“Over the past several years, I have had the honor and pleasure of getting to know Cardinal Dolan,” said Rev. John I. Jenkins, C.S.C., Notre Dame’s president. “He is a man of great intelligence and personal warmth, and a dedicated shepherd of the Church. We were pleased to have him here in 2011 to give the inaugural lecture for the Notre Dame Project on Human Dignity, and we are grateful that he has accepted our invitation to join us in celebrating the achievements of our students and to provide them with words of wisdom as they set out into the world.”

Cardinal Dolan was named archbishop of New York by Pope Benedict XVI on Feb. 23, 2009, after serving for the previous seven years as archbishop of Milwaukee. He was elected president of the U.S. Conference of Catholic Bishops on Nov. 16, 2010. Pope Benedict elevated him to cardinal on Jan. 6, 2012.

Born Feb. 6, 1950, Cardinal Dolan began his high school seminary education in 1964 at St. Louis Preparatory Seminary South in the St. Louis suburb of Shrewsbury, Mo. His seminary foundation continued at Cardinal Glennon College, where he earned a bachelor’s degree in philosophy. He then completed his priestly formation at the Pontifical North American College in Rome where he earned a license in sacred theology at the Pontifical University of St. Thomas.

Cardinal Dolan was ordained to the priesthood on June 19, 1976. He then served as associate pastor at Immacolata Parish in Richmond Heights, Mo., until 1979 when he began studies for a doctorate in American church history at The Catholic University of America. His doctoral dissertation is on the life and ministry of the late Archbishop Edwin O’Hara, a founder of the Catholic Biblical Association.

On his return to St. Louis, Cardinal Dolan served in parish ministry from 1983 to 1987, during which time he also was liaison for the late Archbishop John L. May in the restructuring of the college and theology programs of the archdiocesan seminary system.

In 1987, Cardinal Dolan was appointed to a five-year term as secretary to the Apostolic Nunciature in Washington, D.C. When he returned to St. Louis in 1992, he was appointed vice rector of Kenrick-Glennon Seminary, serving also as director of spiritual formation and professor of church history. He also was an adjunct professor of theology at Saint Louis University.

In 1994, he was appointed rector of the Pontifical North American College in Rome where he served until June 2001. While in Rome, he also served as a visiting professor of church history at the Pontifical Gregorian University and as a faculty member in the Department of Ecumenical Theology at the Pontifical University of St. Thomas Aquinas. His work in the area of seminary education has influenced the life and ministry of a great number of priests of the new millennium.

On June 19, 2001 – the 25th anniversary of his ordination to the priesthood – then Father Dolan was named the Auxiliary Bishop of St. Louis by Pope John Paul II.