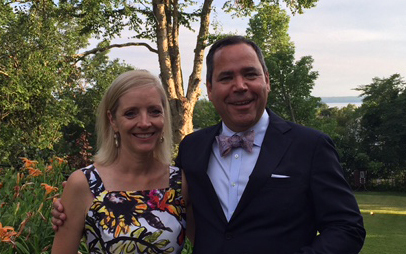 A couple from Toronto has made a $5 million gift to the University of Notre Dame to endow the men’s basketball head coaching position. The gift from Glenn and Stacey Murphy will help to underwrite the salary of the head coach, provide stability and resources for the long term and create funds for use within the department.

“The Murphys’ extraordinary generosity and the confidence it reflects in the basketball program that Coach Mike Brey has built is critical to our continued success,” said Jack Swarbrick, vice president and James E. Rohr Director of Athletics. “With Purcell Pavilion having been renovated to be one of the best basketball arenas in the country, the soon to be developed practice facility, our sustained competitive success, and now the endowment of both our men’s and women’s head coaching positions, Notre Dame basketball is as well positioned as it ever has been to help our student-athletes achieve excellence on the court and in the classroom.”

“It is such a great honor to have Glenn and Stacey provide this wonderful gift to the University,” Brey said. “It will enable the Notre Dame men’s basketball program to continue its proud tradition of providing great leadership and personal development for our student-athletes in the years to come.

“Talking with Glenn and Stacey during their visits to campus, we shared an immediate connection over our dedication to education, family and collegiate athletics. I’m thrilled they have decided to get involved with our program in such a powerful way.”

Glenn Murphy is the recently retired chairman and chief executive officer of global retailer Gap Inc., having served in that position from July 2007 through the end of 2014. He is credited with reviving the company through a strategic mix of global growth, acquisitions, innovative technology and a commitment to operational excellence. During his tenure, the company expanded internationally to nearly 50 countries, retained and attracted world-class talent and increased its focus on the evolving consumer.

A graduate of the University of Western Ontario, Murphy previously served as chair and CEO of Shoppers Drug Mart Corp. and in a variety of executive management positions with Loblaw Companies Limited.

Murphy attended his first Notre Dame football game in 1981 after having been raised a self-proclaimed rabid Notre Dame fan in an Irish Catholic household in Canada. Whether in South Bend, Indiana; Dublin, Ireland; or at bowl games, he can usually be seen with his great friend and fellow Canadian Perry Dellelce, a 1987 graduate of Notre Dame’s master of business administration program. While Glenn’s introduction to Notre Dame athletics was through football, the Murphys have followed Notre Dame men’s basketball closely and became more engaged after meeting Mike Brey. The Murphys plan on being regulars at Purcell Pavilion supporting current and future Irish teams.

The Murphys are the parents of two adult children, Brendan and Shannon.

“We are so proud to be forever associated with ND Athletics, the men’s basketball program and especially a quality individual like Coach Mike Brey,” Glenn Murphy said. “Stacey and I are excited to join the prestigious list of Canadian donors to the University of Notre Dame.”

Brey came to Notre Dame beginning with the 2000-01 season, and his 15 previous Irish campaigns have produced 10 NCAA Championship appearances — highlighted by Notre Dame’s 2015 Atlantic Coast Conference championship, a 32-6 record and advancement to the NCAA Elite Eight.

His 16 seasons with the Irish have produced a 351-175 record (.668) — and five previous years as head coach at Delaware featured a 99-52 mark with two more NCAA appearances. Brey spent eight years (1987-88 through 1994-95) as an assistant coach at Duke while the Blue Devils won two NCAA titles and made four other Final Four appearances.

Brey was named the 2011 Associated Press National Coach of the Year and three times — 2007, 2008 and 2011 — was the Big East Conference Coach of the Year. He coached three players who were named Big East Player of the Year — Troy Murphy, Luke Harangody and Ben Hansbrough. His 146 victories are fifth most in Big East history.

Since 2000, Brey has helped raise more than $2.6 million for the South Bend/Michiana community’s fight against cancer. Notre Dame’s head coach was the recipient of the 2003 Coaches vs. Cancer (CVC) Champion Award, given annually by the CVC National Council and the National Association of Basketball Coaches. He has been a national board member of the council since February 2003.

Brey has earned numerous accolades for his commitment and participation in fighting various health issues:

Brey is a 1982 graduate of George Washington University. Born in Bethesda, Maryland, he played his high school basketball under legendary DeMatha High School coach Morgan Wootten. Recipient of an honorary monogram from the Notre Dame Monogram Club, Brey is a former chair of the NCAA Division I Men’s Basketball Rules Committee.