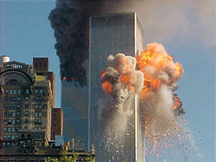 On the sixth anniversary of the Sept. 11, 2001, terrorist attacks on the United States, the University of Notre Dame will honor their victims in three ways Tuesday.