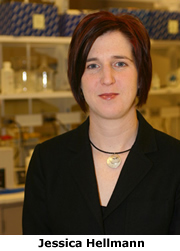 If you ask Jessica Hellmann how she came to be a biologist, shell tell you she grew up as a farm kid in Anderson, Ind.

The fact that I was a farm kid and my father was an engineer tells a lot of the story,she says.I was always outside, and I was encouraged to take math and science in college.

Today, Hellmann is an environmentalist whose focus is the biological impact of climate change. Its an interesting time to be working in the field, she says. Ten years ago the general public knew little about global warming. Today, she says, theres a much wider knowledge and acceptance of the basic science behind climate change.

Hellmann studies butterflies, although she considers herself aglobal change biologist.She uses butterflies as a study organism for a number of reasons.

Theyre insects, and insects run the world,she says.They provide very important ecological services, and are economically important in both positive and negative wayspollination and disease. They have a short life cycle, and respond to temperature change. Its a lot harder to study a grizzly bear.

Hellmanns research focuses on comparisons of two butterfly speciesswallowtails and duskywingsand the plant communities they live in. The research is carried out in Mediterranean-like climates on the West Coast.

Places where it rains a lot in the winter, and hardly at all in the summer,she said.A lot of our work takes place in Vancouver Island, British Columbia and Ashland, Ore.

The large and colorful swallowtail eats a wide variety of plants. The small brown duskywing (not all that sexy,Hellmann says) is much more specialized.

Populations of each butterfly have a range that extends from Central and Northern California north to Vancouver Island. Geography is at the crux of the problemas climate change causes temperatures to become warmer, plant and butterfly populations will likely die off at the southern end of the range. The question that has to be answered is whether populations at the northern end of the range will be able to shift farther north.

Those that can move toward the poles should be all right,Hellmann says.But we may have to worry about the others.

Hellmanns research, which is carried out both in the field and in greenhouses on the roof of the Galvin Life Sciences building, determines which species will be able to adapt, and which will struggle and perhaps die out.

If climate change has a negative effect on species, Hellmann says, there may be ways to help them along. Assisted migrationmoving and introducing species purposelymay be one strategy employed. Hellmann concedes that some species introductions havent worked out well in the past. Kudzu, introduced as an ornamental plant, now covers millions of acres in the south.

But we may be at the point where were looking at the lesser of two evils.

Climate change is a train coming down the track,Hellmann said.We may have to embark on strategies that have risk. Its not the same situation as historically. This is something new.

Hellmann suggests that the best solution will be to tackle the problem of climate change head on.

If you want to preserve biodiversity, we need to reduce greenhouse gases,she said.Reducing individual energy consumption is one small step, but dont let politicians ignore it. We need to have collective actiona national policy. The public can call for that, and expect it. If they dont call for it, it wont happen. Policymakers have been twiddling their thumbs for too long.