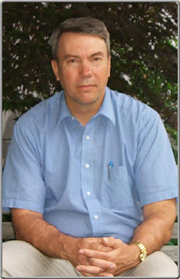 David Kaczynski, executive director of New Yorkers Against the Death Penalty (NYADP) and brother of Theodore Kaczynski, who became infamous as theUnabomber,will give a lecture at 12:15 p.m. Thursday (March 30) in Room 110of the Notre Dame Law School.

On March 28, 1996, FBI agents raided a remote Montana cabin and arrested former college professor Theodore Kaczynski, whose mail bombs had killed three people and injured 23 more since the 1970s.They were acting on information provided by David Kaczynski, who had read the Unabombers ramblingManifestoin the Washington Post, and become suspicious that its author might be his brother, Theodore.

Despite a diagnosis of paranoid schizophrenia, Theodore was charged with several counts of capital murder which carried a mandatory death sentence.After Davids two-year crusade to reduce his brothers sentence to life imprisonment the Justice Department offered a plea bargain, and Theodore received a sentence of four consecutive life terms without parole plus 30 years.

David will speak about his campaign to spare his brothers life and about hiswork toward responsibility and restoration as executive director of NYADP.

Kaczynskis lecture is sponsored by the Notre Dame Coalition to Abolish the Death Penalty.

Contact:Carol Jambor-Smith, director of external relations for the Notre Dame Law School at 574- 631-6891 or cjambors@nd.edu