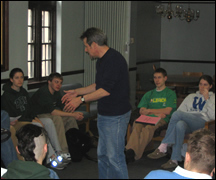 What in the world could a Shakespearean actor teach a student of architecture or law or graphic design?

For the past five years, Actors From The London Stage (AFTLS), an international touring theater troupe, has called the University of Notre Dame its American home. The actors, who hail from such prestigious theater companies as the Royal Shakespeare Company, the Royal National Theatre of Great Britain and Shakespeare’s Globe Theatre, spend a week of residency conducting workshops for students in various classes on campus. In past years, students majoring in film, television and theatre have dominated the actorstime, but this year there was a demonstrated need for more diversified presentations, as other disciplines lined up for their attention.

Paul McCleary, who has appeared in 16 different Shakespeare plays and was on campus this month as part of his fourth AFTLS tour, says he particularly enjoys working with classes the other actors avoid.

Ive worked with psychologists, geographers, the Debate Team and graphic artists,McCleary said.In a way Im quite happy not to be working on Shakespeare sometimes.Ive got three classes of film, television and theatre students, but the other four are not.

During one of thenots,Sociology 195, a group of freshman honors students brought to life scenes from ShakespearesThe Tempest,a Samuel Beckett play, and a D. H. Lawrence poem, in an effort by their professor, Eugene Halton, to expose them to new opportunities and reinforce what hes teaching.

In the beginning of this course,Halton explained,we explore the rise of civilizations as a development of spectator consciousnessversus participation consciousnesscharacteristic of most hunter-gatherer peoples. The exercises Paul gave the class illustrated the physicality involved in drama, the variability and freedom of interpretation of a single text, and the necessity of getting wholly inside the play, rather than distancing oneself reflectively.

Was the effort successful?Kyle Karches, a biology major with virtually no acting experience, thinks so.

Participating is definitely a different experience,he said.It’s difficult to overcome being nervous about performing in front of people and portraying an entirely different person. When you watch a play, you see the actor as the character that he or she is portraying.When we ourselves tried to act, the script did become more than just text, because we had to use those lines to create a believable character with thoughts and emotions.The lines on the page were all that we had, and in having to act out a character based upon those lines, we had to make them more than simple words.

This realization is precisely what drives McCleary, who says its all about the feeling of performance.

Participating, rather than watching or simply reading, changes the studentsunderstanding of something they previously thought was literature or a piece of text,he said.We never pick up something like that and think its something to read.For us, its something to act.

Other classes, including architecture, graphic arts and law, placed more of a focus on improving studentspresentation skills.For some, the AFTLS cast led exercises in timing, while others were critiqued on a variety of fronts from voice projection to fidgeting.

Concluding their week of residency, McCleary, along with George Mayfield,GemmaLake, Andrew Dennis and Julia Watson, gave two performances of “Othello” on Feb. 11 and 12 in the Leighton Concert Hall of Notre DamesDeBartoloCenterfor the Performing Arts.

Now in its 30 th year, AFTLS was developed by Homer Swander, a professor at the University of California-Santa Barbara, and founded by the renowned British actor, Patrick Stewart.The actors use subtle gestures, body movements and voice modulation, rather than elaborate costumes or sets, to convey the action and shifts of character with ease and believability.Offering a tour in the spring and another in the fall, AFTLS visits 16 to 20 colleges and universities annually, and has traveled to more than 150 campuses.

The troupe’s Notre Dame residency is sponsored by a grant from the Henkels Lecture Series with support from the Department of Film, Television and Theatre, Office of the Provost, Department of English,CollegeofArtsand Letters Shakespeare Initiative, and theDeBartoloCenter.

Its an effort that involves much of the campus and creates a rigorous schedule for the actors, who make themselves entirely accessible to Notre Dame students.Their reward comes in the form of feedback from educators like Halton, who easily sums up his level of satisfaction with the experience: