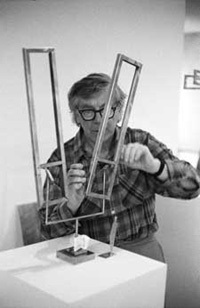 George Rickey died at his home in Saint Paul, Minn., on July 17, 2002, at the age of 95. As seems appropriate for a “kinetic” sculptor, an artist whose work needs motion no less than forged steel, his previous addresses were numerous and far flung, including Santa Barbara, Calif.; East Chatham, N.Y.; Galesburg, Ill.; New York; Chicago; Paris; Oxford; and Helensburgh and Glenalmond in Scotland.

But the very first of them was 1005 W. Washington St. in South Bend, Ind., not three crow-flight miles from the University of Notre Dame’s Snite Museum of Art’s Dillon Courtyard, where two of his sculptures, “Gyratory II” and “Two Lines Oblique,” belie their ungainly titles, elegantly and continually dancing with every breeze, gust or gale that comes across campus.

There are other Rickey works to be seen at the Snite, such as the six that sail the thermal air currents of the museum’s atrium, and there are soon to be many more, gifts from his estate to the University, along with the voluminous correspondence accumulated over the course of his unique artistic career.

Something of that uniqueness was evident during one of his frequent return visits to South Bend, when Rickey provided a Notre Dame audience a glimpse of improbable artistic inspiration. Recounting his military service during World War II, he spoke of his assignment to design machine gun turrets for aircraft. It was this grim but intriguing work, he said, that taught him so much about the ball bearings, balancing weights, metal structure, construction techniques and hardware that he would later put to a far less lethal use in his artistic contrivances.

According to Charles R. Loving, director of the Snite Museum and curator of its George Rickey archive, “the promised gift of 20 George Rickey sculptures from the Rickey Foundation, as well as the future gift of his entire business and scholarly archives to Notre Dame’s Archives, is a coup for Notre Dame because of Rickey’s international standing as a major modern artist.”

In gratitude for these gifts and in appreciation of that standing, the Snite Museum will host a symposium Sept. 25 and 26 (Friday and Saturday) for a renewed appraisal of Rickey’s works.

The symposium, “Abstraction in the Public Sphere: New Approaches,” will bring together artists and art scholars for discussions of kinetic art in general and George Rickey in particular, and it will include major addresses by Nan Rosenthal, former senior consultant for modern and contemporary art at the Metropolitan Museum of Art and author of a biography of George Rickey, and Mary Miss, an artist whose work merges sculpture, architecture and landscape design.

Concurrently, two other celebrations of Rickey’s artwork will be held off campus. The Community Foundation of St. Joseph County will install five large Rickey sculptures in downtown South Bend for a year, beginning Sept. 26. The sculptures will be within walking distance of each other, to blaze a “Rickey Trail” through the city’s business district.

At the South Bend Museum of Art an exhibition of 77 paintings, drawings and sculptures by Rickey will run from Sept. 26 through Jan. 10.

“I was snatched from South Bend at the age of 6 in 1913, and it was Notre Dame that brought me back,” Rickey once said.

Now he is now back for good, if it even be feasible to ascribe permanence to this artist of movement, whose undulant blades, planes and whorls of immaculate steel continue to tease graceful motion from the air of interior space, sail the winds of his native sky, and awaken in both an avowal of new and inexhaustible beauty.

More information is available by visiting http://georgerickey.nd.edu/ on the Web.