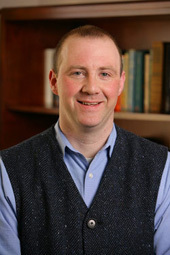 Brian Ó Conchubhair, associate professor in the Department of Irish Language and Literature at the University of Notre Dame, has won an award for his book, “Fin de Siècle na Gaeilge: Darwin, an Athbheochan, agus smaointeoireacht na hEorpa (The Irish Fin de Siècle: Darwin, the Language Revival, and European Intellectual Thought),” from the American Conference for Irish Studies.

The award, Duais Leabhar Taighde na Bliana Fhoras na Gaeilge, is bestowed for the best book of the year written in the Irish language.

Published by Cló Iar-Chonnachta in 2009, “Fin de Siècle na Gaeilge” is a study of the Gaelic revival caused by events at the end of the 19th century, such as Darwinism, race extermination, cultural decline, degeneration and cultural nationalism. It also examines the influences that these events had on dialect, fonts, grammar, cultural criticism, literary production and orthography.

“I’ve always been puzzled by the revivalists’ presumed intellectual isolation from mainstream 19th-century European thought,” Ó Conchubhair said. “The idea behind this book was to see what overlap, if any, existed between European intellectual movements—Darwinism in particular—and fin de siècle Ireland.

“What it ended up being was a new way of seeing and reading the revival—less in terms of cultural nationalism and more as an Irish response to European fears of racial decline, cultural degeneration and the emerging racial theory.”

The award committee members described Ó Conchubhair’s research as “important and original scholarship, a pioneering work, a powerful and readable book, and a valuable resource for scholars interested in this area… It is expected that this work will inspire a great many other scholars to follow his lead.”

Ó Conchubhair’s additional research interests are 19th- and 20th-century Ireland, the Irish revival, contemporary Irish-language fiction, and Irish language among the diaspora. He is the author and editor of many other publications, including “WHY IRISH? Irish Language and Literature in Academia; Rebel Cork’s Fighting Story, 1916–1921; and Gearrscéalta Ár Linne.”

The award ceremony took place at the annual meeting of the American Conference for Irish Studies last month.