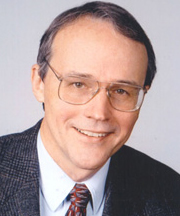 David Beckmann, president of the Bread for the World Institute, will give a lecture onHunger and Poverty Matter: Progress and the Need for Action in 2006at 7 p.m.Tuesday (March 28) in the University of Notre Dames Eck VisitorsCenter.A public reception will follow.

Beckmanns lecture, which will concern domestic and international poverty policies in light of the upcoming mid-term elections, is sponsored by the Center for Social Concerns as one of its series,Democracy Matters: An Interdisciplinary Examination of the Mid-Term Elections.

A Lutheran minister and an economist, Beckmann worked for the World Bank for 15 years before becoming president of Bread for The World in 1991.Bread for the World is a Christian citizensmovement against hunger whose 54,000 members advocate actions and government policies to alleviate hunger worldwide.He also is the author of many articles and books, includingGrace at the Table: Ending Hunger in God’s World,Transforming the Politics of HungerandFriday Morning Reflections at the World Bank.