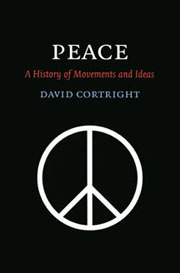 When Cambridge University Press approached David Cortright about writing a history of pacifism, the lifelong peace activist and scholar hesitated.

Im not really a pacifist,explained Cortright, a research scholar at the University of Notre Dames Kroc Institute for International Peace Studies.At least not in the narrow sense that the word is usually understood.

Im less interested in absolute pacifism and more interested in how nonviolent approaches can be realistic in dealing with the challenges of war and peace.Cambridge still liked the idea. After all, who better than Cortright – a soldier during the Vietnam War, a scholar and authority on nuclear disarmament, economic sanctions and nonviolent social change, and an advisor to governments and the United Nations – to writePeace: A History of Movements and Ideas?

Recently published, the book is a labor of love, Cortright says, and one that gives him a chance to redeem the much-maligned wordpacifist,which he says originally meant simplysomeone who advocates for peace and seeks to prevent war.

While making the case forrealistic pacifism,the book traces the human striving for peace through the early pacifist campaigns, the Vietnam antiwar movement, and the disarmament activism that peaked in the 1980s – all the way up to todays opposition to the war in Iraq and responses to thewar on terror.

Several chapters pay close attention to the role of religion in advancing peace, as well as the peace movements foundations in democracy, social justice and human rights.

Even for a veteran peace scholar like Cortright, conducting research for the book was revelatory.

Everybody knows Pope Paul VIs simple line, If you want peace, work for justice,he says.But when you probe this idea, its quite complex, and there is solid social science research to back it up. Its not just a phrase – some of the best social scientists in the world have shown that the lack of economic development and human rights is strongly correlated with armed conflict.

As a young man in the Army following his graduation from Notre Dame in 1968, Cortright spoke out for peace and organized demonstrations and petitions among fellow soldiers against the Vietnam War. In 1978, he was named executive director of SANE, the Committee for a Sane Nuclear Policy, which under his direction became the largest disarmament organization in the United States. Today he is president of the Fourth Freedom Forum in Goshen, Ind.

Cortright is the author or editor of 14 books, includingSoldiers in Revolt: GI Resistance During the Vietnam War(2005),Peace Works: The Citizens Role in Ending the Cold War(1993),The Sanctions Decade: Assessing UN Strategies in the 1990s(2000),A Peaceful Superpower: The Movement Against War in Iraq(2004),Gandhi and Beyond: Nonviolence in an Age of Terrorism(2006), andUniting Against Terror: Cooperative Nonmilitary Responses to the Global Terrorist Threat(2007).

David Cortrights Peaceshows that it is possible to prevent the scourge of war and create a more just and peaceful future – if we are prepared to learn the lessons of history and apply proven peacemaking knowledge,writes Kofi A. Annan, former Secretary-General of the United Nations.This is a hopeful but realistic book that deserves to be read and studied widely.

A book launch to celebrate the publication ofPeacewill begin at 4:15 p.m., Tuesday (Sept. 23), in Room C-103 of Notre Dames Hesburgh Center for International Studies. It will be followed by a reception and book signing.