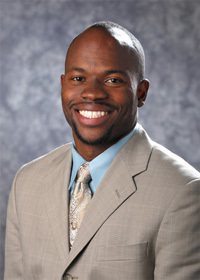 M. Brian Blake, most recently department chair and director of graduate studies in computer science at Georgetown University, has joined the University of Notre Dame’s College of Engineering as associate dean for strategic initiatives and professor of computer science and engineering.

An expert in the areas of software engineering, Web services, e-commerce and related services, Blake will continue his research in service-oriented computing, agents and workflow technologies; enterprise integration and electronic commerce; software process and life cycles; and software engineering education at Notre Dame. In addition, he has responsibility for teaching undergraduate and graduate courses in software design and engineering, as well as in Internet computing.

Blake’s administrative responsibilities in the Office of the Dean include the development of faculty and graduate student recruitment and diversity strategies, as well as interaction with corporate and foundation partners on external initiatives. In this capacity he will work closely with Peter Kilpatrick, the McCloskey Dean of Engineering and professor of chemical and biomolecular engineering, and Patricia A. Maurice, associate dean of engineering research and professor of civil engineering and geological sciences.

Blake has served as an adjunct professor at the Virginia Polytechnic Institute and State University and as consulting director of services computing and research for Cleared Solutions LLC supporting the Department of Defense. Prior to that, he worked as an expert-level system architect and software engineering consultant for organizations such as the Federal Aviation Administration, U.S. Department of Justice and various legal firms.

He also worked for several years as a software architect and expert developer at companies such as General Dynamics, General Electric, Lockheed Martin and The MITRE Corporation.

A strong advocate of engineering and science education, Blake created innovative approaches to leverage the strengths of his department at Georgetown in the development of a world-class graduate program, increasing both quality and enrollment over his tenure. One program that he initiated specifically targeted computer science students from the Washington, D.C., area. He also initiated a series of computer science courses, called Computing Perspectives, to attract students from other disciplines into computing careers. He is a highly sought after speaker for the recruitment of underrepresented minorities in computer science and information technology research careers.

Blake is the primary inventor (with co-inventors at The MITRE Corporation) of “System for and Method of Using Component-based Development and Web Tools to Support a Distributed Data Management System.” The patent application for this system is pending.

As the youngest African-American to be granted tenure in a computer science department and the first African-American department chair at Georgetown University, Blake has received many honors and awards, including induction as a distinguished lecturer in the Institute of Electrical and Electronics Engineers (IEEE) Distinguished Visitor Program; IEEE best paper nominee at the International Conference on Services Computing (2008); one of 10 Emerging Scholars for 2007 by “Diverse: Issues in Higher Education;” top 5 most viewed articles, Information Systems and E-Business Management (February 2005); nominee and participant in the National Academy of Science’s “Frontiers in Science” (2005); best transaction paper of 2003 in IEEE Transactions on Education (October 2004); nominee and participant in the National Academy of Engineering’s “Frontiers in Engineering” (2004); most promising engineer/scientist in industry by U.S. Black Engineer and Information Technology magazine and Lockheed Martin Corp. (2003); MITRE Corporation Annual Diversity Award (2002) and National Society of Black Engineers (NSBE) Fellow Award (1999).

Blake is a senior member of the IEEE Computer Society and a member of the Association of Computer Machinery and the NSBE.
He currently serves as associate editor of several journals, including IEEE Internet Computing, IEEE Transactions on Services Computing, and the International Journal of Information Systems for the Service Sector.