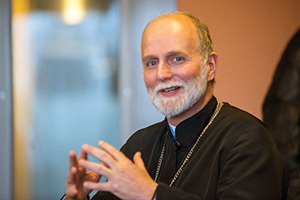 Sponsored by the Nanovic Institute for European Studies, Bishop Gudziak’s lecture, titled “Ukraine, Democratic Revolution, and the Challenges of a Catholic University,” is free and open to the public.

A. James McAdams, director of the Nanovic Institute for European Studies, describes Bishop Gudziak as “a major figure in the Eastern Catholic Church who has demonstrated that it is possible to create a vibrant Catholic community in a country previously ruled by a dictatorship.”

Bishop Gudziak was born in the United States to Ukrainian parents. After earning dual degrees in philosophy and biology at Syracuse University, he studied theology and ecclesiastical sciences at the Pontificia Università Urbaniana and went on to earn his Ph.D. in Slavic and Byzantine cultural history from Harvard University in 1992. He then moved permanently to Lviv, where he was ordained in 1998, joined a commission for the revival of the Lviv Theological Academy, founded a new Institute of Church History and became the rector (and later president) of the Ukrainian Catholic University.

Gudziak has been a prominent leader in higher education in Ukraine after years of communist regime. An important voice in the Orange Revolution (2004-2005), which occurred in response to a controversial election decided in favor of Viktor Yanukovych, Gudziak also played a key role in Ukraine’s peaceful demonstrations in the Maidan of Kiev in 2013.

McAdams notes that Gudziak “has presented Ukrainian citizens with a vivid image of how to live with integrity and honor in a country still struggling with the vestiges of communism. He exhibited extraordinary leadership in the founding of the Ukrainian Catholic University and has inspired a generation of Ukrainian students and scholars.”

The Keeley Vatican Lecture was established by the generosity of Terrence R. Keeley, class of ’81, to bring distinguished representatives from the Vatican to explore questions involving Notre Dame’s Catholic mission. For more information and the archive of past lectures, visit nanovic.nd.edu/vatican.