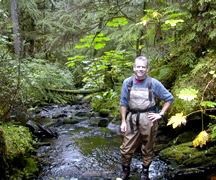 Gary A. Lamberti, professor of biological sciences at the University of Notre Dame, has co-edited the second edition of a book titledMethods in Stream Ecology.

Lamberti and co-editor F. Richard Hauer of theUniversityofMontanaassembled 67 leading ecologists from the around the world to contribute to the 36 topical chapters in the book, which first appeared in 1996. Published by Academic Press/Elsevier, the work presents state-of-the-art techniques for measuring all aspects of rivers and streams, including water flow, geology and geomorphology, water quality, and the major biological groups ranging from bacteria to fish.

Streams and rivers are among the most imperiled environments on the planet, with channelization, pollution, dams and invasive species threatening the water quality and biota of these ecosystems on a global scale,Lamberti said.Measuring the physical, chemical, and biological attributes of these highly dynamic ecosystems has historically presented a major challenge for scientists and engineers. This book provides the methods in one source to assess the condition of these vitally important ecosystems.

The book is designed to be useful for all levels of investigation of streams and rivers, containing methods suitable for students, resource managers, and practicing scientists and engineers.

We tried to present approaches that would be useful for a variety of venues, including the classroom, field-based laboratories, community-led water monitoring programs, and high-end research studies,Lamberti said.Even now, by far the best part of my week is when I can get out into a stream to collect insects, sample fish, or do anything in the water. We wanted to provide that opportunity for everyone with detailed, but user-friendly, instructions.