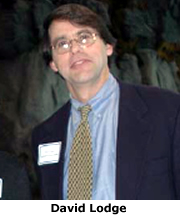 David Lodge, a professor of biological sciences at the University of Notre Dame, will testify Wednesday (March 7) before the U.S. House of RepresentativesSubcommittee on Water Resources and Environment on the impact of ship-borne invasive species in theGreat Lakes.

The subcommittee is examining the issue of how to manage biological invasions from ballast water in ships. Around the world, species released from ships threaten human health, damage ecosystems, and increase costs to industry.

The invasions result from ships taking on ballast water that contains species from one area and then discharging that water and the species in an area where they previously did not exist. Such invasions are a leading policy concern in navigable freshwater and marine ecosystems.

Lodge, who was the first chair of the national Invasive Species Advisory Committee, was the co-author of a 2004 paper with then-Notre Dame doctoral student John Drake in which they identified global hot spots for biological invasions from ballast water and examined the best options for managing these invasions.

Lodge, an ecologist whose research examines the ways in which human activities change freshwater ecosystems, also recently chaired a committee that wrote a position paper on biological invasions for the Ecological Society of America.