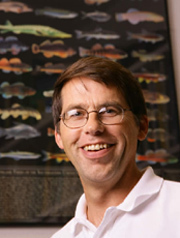 David Lodge, professor of biological sciences and director of the Center for Aquatic Conservation at the University of Notre Dame, briefed U.S. House and Senate staffers Tuesday (May 5) on House Resolution 669, the “Nonnative Wildlife Invasion Prevention Act.” Lodge previously testified about the proposed legislation before the U.S. House Committee on Natural Resources Subcommittee on Insular Affairs, Oceans and Wildlife on April 23.

House Resolution 669 is designed to help prevent the introduction and establishment of nonnative wildlife species that negatively impact the economy, environment, or other animal species’ or human health.

Lodge served as the first chair of the national Invasive Species Advisory Committee and the lead author of the Ecological Society of America’s paper calling for a stronger government response to the problem of invasive species.

In his testimony Lodge noted, “Everywhere biologists look, we find more and more alien species, with the total number of alien species increasing over time, apparently at an accelerating rate in some places. Perhaps more important that the number of species is the fact that in many situations the abundance of these aliens reaches extremely high levels — like that of silver and bighead carp in Midwestern rivers, the aquatic weed hydrilla in southeastern waterways and increasingly in Midwestern lakes, nutria in Chesapeake Bay and Louisiana coastal marshes, snakehead fishes in the Potomac River, apple snails in South Carolina and along the Gulf Coast — so that there is literally very little room left for native species, even those that are highly valuable in recreation or for commercial harvest.

“The total environmental and financial impact is very high. In addition, imported animals, or the parasites and pathogens that come with them, can endanger human lives, as the 2003 outbreaks of monkeypox and SARS so vividly illustrated.”

“The solution is a policy like those that govern other substantial risks in the U.S.: a policy under which species (like drugs and food) are screened for potential harm before their entry into the marketplace is allowed,” he said. “While the scientific expertise to do this with sufficient accuracy did not exist a few decades ago, recent scientific advances, in which screening is often 8o percent accurate, make this possible.”