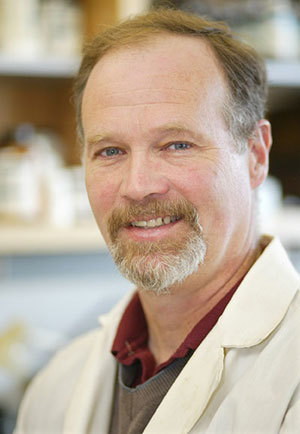 Kenneth R. Miller, professor of biology at Brown University, will receive the University of Notre Dame’s 2014 Laetare Medal, the oldest and most prestigious honor given to American Catholics, at Notre Dame’s 169th University Commencement ceremony May 18 (Sunday).

“Kenneth Miller has given eloquent and incisive witness both to scientific acumen and religious belief,” said Notre Dame’s president, Rev. John I. Jenkins, C.S.C. “As an accomplished biologist and an articulate believer, he pursues two distinct but harmonious vocations and illustrates how science and faith can mutually flourish.”

A cell and molecular biologist whose research concerns problems of structure and function in biological membranes, Miller is a prominent and outspoken critic of proponents of the creationism and intelligent design movements who argue that Darwin’s theory of evolution is inherently atheistic and incompatible with Christian faith. In addition to having written two widely read books on these subjects, “Finding Darwin’s God” and “Only a Theory,” Miller is co-author, with Joseph S. Levine, of major introductory college and high school biology textbooks.

“Like many other scientists who hold the Catholic faith, I see the Creator’s plan and purpose fulfilled in our universe,” Miller said recently. “I see a planet bursting with evolutionary possibilities, a continuing creation in which the Divine Providence is manifest in every living thing. I see a science that tells us that there is indeed a design to life, and the name of that design is evolution.”

A 1970 graduate of Brown University, Miller earned a doctoral degree in biology from the University of Colorado in 1974. He taught at Harvard University from 1974 to 1980, when he returned to his alma mater, where he has served on the science faculty for the last 34 years.

In addition to his publications and lectures, Miller has debated proponents of creationism and intelligent design in television appearances ranging from C-SPAN to Comedy Central’s “The Colbert Report.” In 2005, Miller served as lead witness in the landmark Kitzmiller vs. Dover trial, defending the teaching of evolution in public schools.

The Laetare (pronounced Lay-TAH-ray) Medal is so named because its recipient is announced each year in celebration of Laetare Sunday, the fourth Sunday in Lent on the Church calendar. “Laetare,” the Latin word for “rejoice,” is the first word in the entrance antiphon of the Mass that Sunday, which ritually anticipates the celebration of Easter. The medal bears the Latin inscription, “Magna est veritas et prevalebit” (“Truth is mighty, and it shall prevail”).