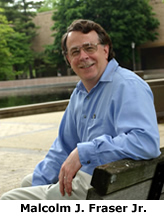 Malcolm J. Fraser Jr., professor of biological sciences at the University of Notre Dame, has been selected as a fellow of the American Association for the Advancement of Science. Election as a fellow is an honor bestowed upon AAAS members by their peers.

Fraser, who joined the Notre Dame faculty in 1983, was honored for distinguished contributions togenetics and transgenesis, specifically in the discovery of, development, and dissemination of the piggyBac transposable element and derived transgenic vector system.

Frasers studies merge research in molecular virology and transgenic engineering with the goal of advancing applications that improve the human condition. A major thrust of his research is the utilization of molecular approaches to understanding and manipulating virus genetics in ways that permit beneficial transgenic alteration of the invertebrate hosts of these viruses.

Fraser is the recipient of a $2.5 million grant from the Grand Challenges in Global Health Initiative for a program to develop a new approach to controlling dengue fever.

He is attempting to develop an approach to suppress the replication of the dengue virus within Aedes mosquitoes, using genetic engineering to introduce a molecular mechanism that can harness the virusown genetic molecule to activate a cell death pathway that kills infected cells. Thisdeath upon infectionstrategy would provide immunity against dengue in transgenic mosquitoes. Coupling this immunity with a selectable gene would allow the immune mosquitoes to compete with native mosquitoes, effectively reducing the number of infected mosquitoes and thus limiting the capability of Aedes populations to transmit disease.

Fraser is among 449 newly selected AAAS fellows nationwide and brings the number of current Notre Dame AAAS fellows to 18. He will be presented with an official certificate and a gold rosette pinFeb. 17 at the associations annual meeting inSan Francisco. The association is the worlds largest general scientific society and publisher of the journal Science.