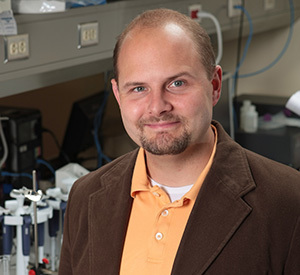 The American Cancer Society has reported that lung cancer, which kills more Americans than any other type of cancer, is expected to result in an estimated 158,080 deaths in 2016.

Although drugs are currently available to fight lung cancer, drug discovery challenges persist because treatment options are limited. Not only is lung cancer often drug resistant, but radiation treatment and surgery can be quite difficult depending on the location of the tumor(s) within the lungs.

Robert Stahelin, Adjunct Associate Professor of Chemistry and Biochemistry at the University of Notre Dame, Interim Senior Associate Director at the Harper Cancer Research Institute (HCRI) and Associate Professor of Biochemistry & Molecular Biology at the Indiana University School of Medicine-South Bend, is working to better understand lung cancer at a cellular level and is investigating drugs that could inhibit lung cancer growth and prevent it from spreading.

“I’m looking at signals within the lung cancer cells that cause them to grow quickly, move and divide,” he said. “With cancers, a primary tumor may metastasize and attack another organ in the body. Lung cancer often metastasizes — or spreads — to other organs such as the liver. Once the liver is infected, the cancer causes increased health problems and patients are more likely to succumb to the disease.”

Stahelin’s laboratory aims to advance understanding of how the mechanisms of lipid signaling are controlled in lung and other types of cancers. Membranes, composed mainly of lipids, hold the keys to cell division, growth and metabolism necessary for cancer cell growth and metastasis.

That understanding could ultimately help to determine the causes of lung cancer and identify viable targets, lipids or proteins for drug development and treatment.