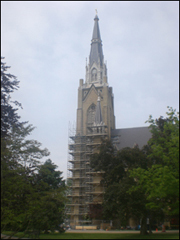 Work has begun on the University of Notre Dame campus to renovate the exterior of the Basilica of the Sacred Heart and to repair damage caused to the church when high, straight-line winds hit the South Bend area last year.

During the May 2007 storm, which also caused significant tree damage across campus, one of the Basilicas four large spires came crashing to the ground and two stained-glass windows at the back of the structure were broken when a four-story pine tree snapped near the top and crashed into the side of the building.

In addition to the spire that fell from the southwest corner of the Basilica, the remaining three spires also were removed following the storm. As part of the repair work, crews will replace all four pieces and fix slate that also was knocked loose from the roof in the storm.

The repair work happens at a time when the Basilica already was scheduled for renovations, including regilding the cross atop the main steeple, repainting the tower and tuckpointing bricks on the building.

A scaffolding is in place and will remain until the completion of the $1.8 million project, which is expected to be completed in October.