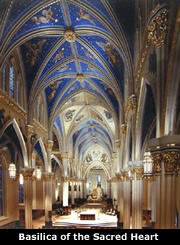 Mass from the Basilica of the Sacred Heart at the University of Notre Dame will be televised weekly on DIRECTV Channel 103 at 10 a.m. Sundays (ET/CT/PT). The first telecast was Sunday (Dec 17).

This new initiative is yet another opportunity for Notre Dame to bring quality Catholic liturgies to individuals and families across the country and around the world,said Rev. Richard V. Warner, C.S.C., director of Campus Ministry.

Notre Dame has been broadcasting Mass from the Basilica on the Hallmark Channel since 2002 with architecturally sensitive audio and video equipment. Special care is given to ensuring that the broadcasts capture the beauty of the liturgy without disrupting a communal prayer. The Hallmark Channel telecasts will continue at 8 a.m. (ET) each Sunday.

The Basilica staff receives enthusiastic and appreciative correspondence each week from viewers across the country, many of whom say they are unable to attend Mass at their local parish for physical reasons and others who suggest that Notre Dames Mass enriches the experience of their local parish liturgy.

The University’s Liturgical Choir, under the direction of Gail Walton, provides music for the 10 a.m. Sunday Mass during the academic year, while the Basilica Collegium Choir, under the direction of Andrew McShane, provides the summer liturgy music. Special technical effort has been made to capture the voices as they are heard by the congregation in the Basilica. Masses at Notre Dame are marked by the fullparticipation of the assembly in the liturgy, and on Sundays the Basilica is usually filled to capacity for its regularly scheduled liturgies.

Technical production of the Mass is accomplished locally by Pentavision Communications Inc., which operates the audio and visual equipment from a control room in the basement of the Basilica. WNDU-TV will send the broadcast via fiber optics to DIRECTVs master control.

More information on the Basilica of the Sacred Heart is available at http://www.nd.edu/~bshweb/..

DIRECTV launched Channel 103 in 2006 with itsSongs of Praiseseries featuring Christian music and celebrities. DIRECTV is an industry leader in satellite-based digital television serving more than 15 million customers.More information is available at http://www.directv.com .