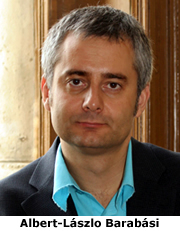 Albert-Lászlo Barabási, Hofman Professor of Physics at the University of Notre Dame, has been named the recipient of a major computing award from a leading Hungarian information technology society and is the co-editor of a new book on networks.

Barabási is a pioneer in the field of networking as a unified scientific theory and the author ofLinked: The New Science of Networks.His early research led to significant findings on how networks are structured and how they operate. Of late, he has begun examining how people behave in networks.

Barabási is the 2006 recipient of the John von Neumann Medal, which is presented by the Hungarian-based John von Neumann Computer Society for outstanding achievements in computer-related science and technology. The award has been presented since 1976 to a maximum of three individuals who have gained distinction in the dissemination of computer culture. Previous recipients of the award include Microsoft founder Bill Gates, former IBM chairman Louis Gerstner and Intel Corporation board chair Andrew Grove.

The von Neumann Society is dedicated to preserving the values that should be included in todays knowledge-based society, setting new directions that meet the requirements of the age and actively forming the information sciences world of the future.

John von Neumann was an eminent mathematician whose work atPrincetonUniversitys Institute for Advanced Study (IAS) led to the building of the IAS binary stored-program computer in 1952.

Barabási also has edited a new book titledThe Structure and Dynamics of Networks.The book, which is published by Princeton University Press, brings together a series of articles from the fields of mathematics, physics, computer science, sociology and biology that examine the new science of networks. Topics covered in the papers range from the historical antecedents of network research to the robustness of networks and the spread of disease. The book was edited in association with Mark Newmann, professor of physics at theUniversityofMichigan, and Duncan J. Watts, associate professor of psychology atColumbiaUniversity.