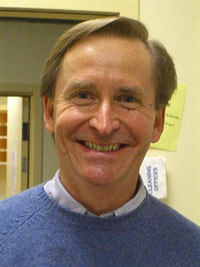 Peter Garnavich, associate professor of physics at the University of Notre Dame, has been awarded a share of the 2007 Gruber Prize in Cosmology for his work in the High-Z Supernova Search Teams discovery of the accelerating universe.The discovery of an accelerating expansion of space radically transformed the standard model of cosmology and led to the idea that the universe is dominated by a mysterious dark energy.

The Gruber Prize in Cosmology has been given annually since 2000 by the Peter and Patricia Gruber Foundation forgroundbreaking work that inspires and enables fundamental shifts in knowledge and culture.The 2007 prize is awarded to the High-Z Team (led by Brian Schmidt of the Australian National University) and the Supernova Cosmology Project (led by Saul Perlmutter of the Lawrence-Berkeley National Lab). The teams share a cash prize of $500,000.

In 1994, Garnavich helped establish the High-Z Supernova Search Team, an international collaboration of 20 astrophysicists, with the goal of tracing the expansion history of the universe using a type of bright, exploding star called atype Iasupernova. Garnavich and his colleagues expected to measure the dark matter density, which, at the time, was believed to be slowing the expansion rate of space. After several years of searching for distant supernovas and precisely measuring their brightness, the team realized that instead of decelerating, the expansion rate was increasing with time.

Imagine that you tossed an apple up in the air and instead of falling back to Earth it gained more and more speed and shot off into spacethe accelerating expansion was that big a surprise,Garnavich said.

The High-Z Team announced its surprising results in 1998 with three papers. The first was led by Garnavich and analyzed a handful of supernovas observed by the Hubble Space Telescope. The results pointed to a low dark matter density and hinted at the existence of a cosmological constant that would drive an acceleration. By March 1998, the High-Z Team had analyzed more supernovas and concluded, with high confidence, that the acceleration was real. The discovery was confirmed by theSupernova Cosmology Project,a competing group.

TheZin High-Z Team is astrophysics shorthand for the amount the universe has expanded as light travels through space. A largeZindicates a great distance and the High-Z Team has discovered and studied supernovas that exploded more than 5 billion light-years from Earth.More information on the High-Z Team can be found at
http://cfa-www.harvard.edu/supernova//HighZ.html .

Initially the source of the acceleration was attributed to Albert Einsteinscosmological constant.This is a term Einstein added to his General Theory of Relativity to balance gravity and keep the universe static. After Edwin Hubbles 1929 discovery that the universe was expanding, Einstein realized his extra term was not needed and considered it a mistake. But the cosmological constant nicely explained the new observations and may yet be shown to be the source of the acceleration. After the High-Z Teams discovery, physicists realized that there are several possible ways of making the expansion accelerate and these models have become known collectively asdark energy.

Since the discovery of acceleration, Garnavich and his colleagues have been able to sharpen their measurements of the cosmic expansion by finding more supernovas at large distances and gain a better understanding of why type Ia supernovas explode. The High-Z team developed theESSENCEproject, which hopes to find 200 supernovae and, earlier this year, found that the dark energy is very similar to Einsteins cosmological constant.

Garnavich is looking forward to the completion of the Large Binocular Telescope (LBT) in Arizona to continue the hunt for dark energy. Notre Dame owns a share of the LBT project, which consists of two 8.4-meter diameter mirrors and is the worlds largest telescope on a single mounting.

The Gruber Foundation also awards prizes in genetics, neuroscience, justice and womens rights.More information on the foundation can be found at http://www.gruberprizes.org/ .