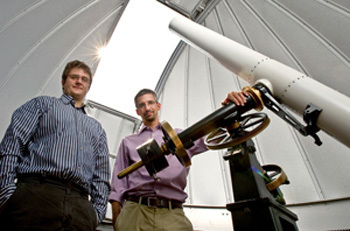 The Napoleon Telescope, an antique instrument freshly refurbished and housed in a modern dome atop Nieuwland Science Hall at the University of Notre Dame, will focus on the moon and maybe Jupiter during Astronomy Night Oct. 3 from 8 to 10 p.m. (later in the week in case of clouds or rain).

More modern telescopes will be set up in the North Quad and the first 300 students will receive t-shirts and donuts. Organizer Peter Garnavich, professor of physics, operated the Napoleon Telescope during a near approach of Mars in 2004.

An Astronomy Night two years ago observed the International Year of Astronomy that marked the 400th anniversary of Galileo’s first recorded astronomical observations. This year’s event is a more general exposure to astronomy and a celebration of the recently completed work on the historic telescope that had suffered from some exposure to weather since the Mars viewing.

“This past year, we put it in a new state-of-the-art modern dome,” Garnavich says. “The physics shop polished all the metal and fixed up all the moving parts for that mounting. Now it’s sparkling and new and pretty and in a nice secure dome.” The telescope, a gift of Emperor Napoleon III, has traveled to several campus locations since it arrived from France in 1867, according to a history written by librarian emeritus Robert Havlik in 2003.

“The lens, the most important part, is the original thing that was donated by Napoleon III,” Garnavich says. “A few years after the Great Fire of 1879, it was remounted.” The lens was put on a new telescope more than a century ago, and the telescope was installed in a shed on the Nieuwland Hall roof in 1960 after years of storage.

Visitors to Astronomy Night can visit the rejuvenated telescope as well as portable instruments moved to North Quad from the Jordan Hall of Science. “We picked a date when the Moon would be best for viewing,” Garnavich says, adding that the North Quad telescopes also will aim at Jupiter, binary stars of different colors, and, if the conditions are good, a recent supernova in a nearby galaxy.”