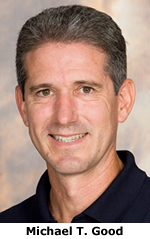 University of Notre Dame alumnus Michael T. Good, an Air Force colonel, has been named to the crew of the upcoming Hubble Space Telescope repair mission. The 2008 space shuttle Discovery flight, announced Tuesday (Oct. 31) by NASA, will be Goods first shuttle mission and he will fly as a mission specialist.

Good and the Discovery crew will boost the satellite into a higher orbit, replace its aging batteries and gyroscopes and install some new instruments.

The repair mission, which will cost an estimated $900 million, would keep Hubble working until its replacement, the James Webb Space Telescope, can be launched in 2013.

Launched in 1990, the Hubble has captured spectacular images of the universe, popularizing astronomy and advancing our understanding of space. However, it has suffered a series of problems in recent years. Two of its six gyroscopes, which keep it oriented in space, have failed and one of its cameras recently went off-line temporarily for unknown reasons. NASA estimates that it was unlikely to last beyond 2010 without repairs.

Good, a native ofBroadview Heights,Ohio, was graduated through Notre Dames Air Force ROTC program in 1984 with a degree in aerospace engineering and earned a masters degree in the same field from the University in 1986. He was then assigned to Elgin Air Force Base,Fla., as a flight test engineer for the cruise missile program.

He earned his wings in 1989 as a weapons systems officer and flew F-111s. In 1993, he was selected to attend the Air Force Test Pilot School at Edwards Air Force Base,Calif., and was graduated the following year.

Good was selected by NASA as a mission specialist in 2000 and, following the completion of two years of training and evaluation, he was assigned technical duties in the Astronaut Office Advanced Vehicles Branch and subsequently served in the Space Shuttle Branch.

Notre Dame alumnus and astronaut James D. Wetherbee, who retired from NASA in 2005, flew six times aboard the space shuttle and is the onlyU.S.astronaut to command five space flights.

Kevin A. Ford, a 1982 Notre Dame graduate, was named to the astronaut corps in 2000. He currently trains for, and works on space missions as a space shuttle and space station capsule communicator in NASAsMissionControlCenter.

Annette P. Hasbrook, a 1985 graduate, is a flight director at NASAsJohnsonSpaceCenter.