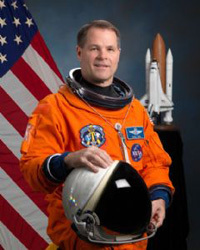 University of Notre Dame alumnus Kevin A. Ford is serving as the pilot of Space Shuttle Discovery on the STS-128 mission that launched last night from NASA’s Kennedy Space Center in Florida.

Ford is carrying the jacket of a book titled “Aeronautics to Aerospace at the University of Notre Dame,” which was written by Thomas J. Mueller and Robert C. Nelson, professors of aerospace and mechanical engineering, into space.

During a 13-day flight, the crew of seven Discovery astronauts will deliver science and storage racks, a freezer to store research samples, a new sleeping compartment and a treadmill named after comedian Stephen Colbert to the International Space Station. The treadmill is a consolation prize for Colbert, who hoped to have a room in the space station named after him.

Ford, who was born in Portland, Ind., and considers Montpelier, Ind., his hometown, was graduated through Notre Dame’s ROTC program in 1982 with a degree in aerospace engineering. In 1989, he earned a master of science degree in international relations from Troy State University and, in 1994, a master of science in aerospace engineering from the University of Florida. He earned his doctorate in astronautical engineering in 1997 at the Air Force Institute of Technology at Wright Patterson Air Force Base in Ohio.

This is Ford’s first flight aboard the space shuttle. He joined NASA as a pilot in 2000 and has had a variety of assignments, including technical duties, advanced exploration issues, and avionics and testing.

In 2004, Ford was director of operations at the Gagarin Cosmonaut Training Center in Star City, Russia. Between 2005 and 2008, he was capsule communicator in the mission control center for six shuttle missions.

Notre Dame alumnus Michael T. Good flew as a mission specialist on Space Shuttle Atlantis Mission STS-125 in May of this year.

Alumnus and astronaut James D. Wetherbee, who retired from NASA in 2005, flew six times aboard the space shuttle and is the only U.S. astronaut to command five space flights.

W. Michael Hawes, a 1978 graduate, is associate administrator for program analysis and evaluation in NASA’s office of the Administrator.