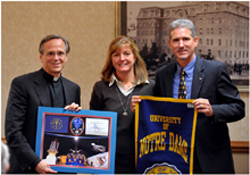 Col. Michael T. Good, a 1984 University of Notre Dame alumnus who served last spring on the space shuttle mission to repair the Hubble Space Telescope, returned to his alma mater this weekend to make a special presentation and meet with College of Engineering and ROTC students.

In a luncheon Friday, Good presented Notre Dame’s president, Rev. John I. Jenkins, C.S.C., with a photo collage and a Notre Dame banner that he had carried aboard the shuttle Atlantis during the Hubble servicing mission May 11 to 24.

Father Jenkins presented Good with a framed Notre Dame football jersey with the number 84, symbolic of the year Good earned his bachelor’s degree in aerospace engineering.

As an undergraduate, Good was a member of the Air Force ROTC. After earning a master’s degree in aerospace from Notre Dame in 1986, he was commissioned as a second lieutenant in the Air Force and served in a variety of capacities. He ultimately became a test pilot, working with a wide array of aircraft, including the B-2 Stealth Bomber. In all, he has logged more than 2,600 hours in some 30 different aircraft.

In 2000, Good was selected to NASA’s astronaut corps, where for the past decade he has been involved in the ground operations of numerous missions.

The mission to Hubble was Good’s first space flight. Over the course of almost two weeks, he and three other astronauts made five space walks to repair the telescope. It now has four new or rejuvenated scientific instruments, as well as new batteries, gyroscopes, outer blankets, and a new computer.

Good has been assigned to a mission next May to the International Space Station.