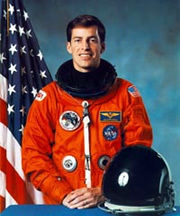 Astronaut and University of Notre Dame graduate James D. Wetherbee has retired from NASA to pursue other interests. He flew six times aboard the space shuttle and is the only U.S. astronaut to command five space flights.

Most recently, Wetherbee, 52, served as the space shuttle lead in the Independent Technical Authority at NASAs Johnson Space Center (JSC). His earlier positions included service as technical assistant to the director of JSCs Safety and Mission Assurance Directorate, two years as director of Flight Crew Operations at JSC, and five years as the deputy director of JSC.

“Jim is a true expert in space operations, who has dedicated his life to space exploration,” said Director of Flight Crew Operations Ken Bowersox. “His engineering sense and relentless attention to detail were critical to the success of all his space missions. Those same skills will serve our country well, as Jim moves on to new challenges.”

Wetherbee was selected to the astronaut corps in 1984 and served as pilot on his first space flight in 1990. He was the commander on missions in 1992, 1995, 1997, 2001 and 2002, and his flights included the first rendezvous by a shuttle with the Russian Mir Space Station, a docking mission to Mir, and two flights to the International Space Station.

Wetherbee was graduated from Notre Dame in 1974 with a bachelors degree in aerospace engineering. He received his commission in the Navy in 1975 and served as a naval aviator until his selection to the astronaut program. He retired from the Navy in 2003 with the rank of captain.

U.S. Air Force Lt. Col. Kevin A. Ford, a 1982 Notre Dame graduate with a bachelors degree in aerospace and mechanical engineering, and Air Force Lt. Col. Michael T. Good, who earned bachelors and masters degrees in aerospace and mechanical engineering from Notre Dame in 1984 and86, respectively, were selected to the astronaut corps in 2000.

Annette P. Hasbrook, a 1985 graduate with a bachelors degree in aerospace and mechanical engineering, is a flight director at the Johnson Space Center.