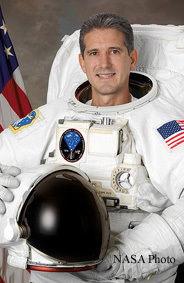 University of Notre Dame alumnus Michael T. Good is a member of the Space Shuttle Atlantis Mission STS-132 crew that lifted off today on its final planned mission. The flight is Good’s second shuttle mission and he is flying as a mission specialist.

Atlantis will deliver the Russian-built Rassvet Mini Research Module to the International Space Station. The 12-day flight will see three space walks to perform maintenance tasks and to attach the Russian module to the station.

The Atlantis mission is the third of five flights scheduled for this year, after which the United States plans to retire its three-ship shuttle fleet due to cost and safety concerns.

Good, a native of Broadview Heights, Ohio, was graduated through Notre Dame’s ROTC program in 1984 with a degree in aerospace engineering and earned a master’s degree in the same field from the University in 1986. He was the assigned to Eglin Air Force Base, Fla., as a flight test engineer for the cruise missile program.

He earned his wings in 1989 as a weapons system officer and flew F-111s. In 1993, he was selected to attend the Air Force Test Pilot School at Edwards Air Force Base, Calif., and was graduated the following year.

Good was selected by NASA as a mission specialist in 2000 and, following completion of two years of training and evaluation, he was assigned technical duties in the Astronaut Office Advanced Vehicles Branch and subsequently served in the Space Shuttle Branch.

Good served last May on the crew of STS-125, the final Space Shuttle mission to the Hubble Space Telescope. In completing his first space mission, he logged almost 13 days in space and a total of 15 hours and 58 minutes of EVA (Extra Vehicular Activity) in two spacewalks.

In October 2009, he retired from the Air Force with the rank of colonel.

Notre Dame alumnus and astronaut James D. Wetherbee, who retired from NASA in 2005, flew six times aboard the space shuttle and is the only U.S. astronaut to command five space flights.

Kevin A. Ford, a 1982 Notre Dame graduate, was named to the astronaut corps in 2000. He served as pilot for Space Shuttle Mission STS-128 which flew to the International Space Station last August.

W. Michael Hawes, a 1978 graduate, is associate administrator for program analysis and evaluation in NASA’s Office of the Administrator.