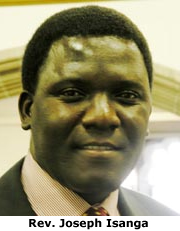 As news trickled back to campus in January of a Notre Dame delegations efforts inUganda, Rev. Joseph Isanga was flooded with memories and reflections on his home country.

Among them was his own happy prediction of the likely success of the Notre Dame Millennium Village Initiative (NDMVI) in the southern UgandanvillageofNindye, where a partnership with its people, Catholic Church representatives, and faculty and staff fromUgandaMartyrsUniversitywill coax the impoverished region toward sustainable financial independence. Father Isanga serves on the NDMVI advisory board.

These people may be poor, but they have a great interest in improving their situation,said Father Isanga, a postdoctoral research associate inNotre DameLawSchools Center for Civil and Human Rights.

While the area remains impoverished, it has achieved a most important precondition for development: stability.

Father Isanga keeps his eye on Ugandan unrest as a specialist in international human rights. Lately, his attention has turned to northernUganda, which has experienced 20 years of violence as the host of one ofAfricas longest-running wars. A cease-fire has been struck among the players in what one United Nations official describes as theworlds worst neglected humanitarian crisis.

Still, there is much of his heart and a substantial part of his personal history in various venues of southernUganda, where his mother still lives and where he served as a diocesan priest for several years. Life expectancy and child mortality statistics are personal to him: His father died in his 40s, his only sibling, a sister, died as a child.

Born in 1964, two years afterUgandawon independence fromBritain, Father Isangas life also has been defined by the rule of former President Idi Amin in the 1970s, a very strong militaristic presence capable ofhorrible atrocities,as he put it.

He attended high school inKampala, the countrys capital, where violence was frequent.Twice I saw takeovers,he said.I had to run for my life. Bullets were flying over my head.In fact, he says, memories of flying bullets are the norm for his generation.

Father Isanga had a chance to study engineering, but chose the seminary instead. His parish work in the Diocese of Jinja taught him much about the scourge of lingering poverty. The constancy of domestic violence and abuse against women inspired his interest in human rights law.

His bishop sent Father Isanga to law school atMakerereUniversity, hoping he would return as a diocesan lawyer. But his high honors earned him opportunities to pursue both a masters degree and a doctorate of law at Notre Dame.

Father Isangas bishop has adjusted his hopes to the priests growing accomplishments and supports his plan to contribute toUgandas development beyond his support of NDMVI and his pastoral work.

As villages need to be revitalized, so, too, doesUgandas legal system.The law, the law profession, and the political process all have deteriorated after many years of turmoil. Father Isanga therefore hopes to be involved in restoring the rule of law and political representation nationally.

The preparation hes undertaken at Notre Dame also has brought him closer to assembling the resources hell need for that task: knowledge, experience, contact and the skill to employ them.