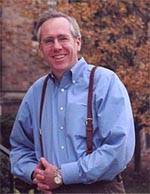 The enduring value of literature and literary criticism in the age of technology is the focus of a recently published book by Mark W. Roche, I.A. OShaughnessy Dean of the College of Arts and Letters at the University of Notre Dame.

Titled “Why Literature Matters in the 21st Century” (Yale University Press), the book defends the value of literature and explores the ways technical innovations have influenced literature – in its production, its themes and its forms. The book also examines literature and its connection to virtue and moral excellence.

“Roche declares that the modern age is technological, but makes the convincing case that literature is as ever a repository of human values, thereby effectively representing a point of view we have lost: the possibility of values in a technological society,” said Donald Phillip Verene, author of “The Art of Human Education.”

Roche specializes in the study of modern German literature, literature and philosophy, and German intellectual history. He also holds appointments as the Rev. Edmund P. Joyce, C.S.C., Professor of German Language and Literature and as a concurrent professor of philosophy.