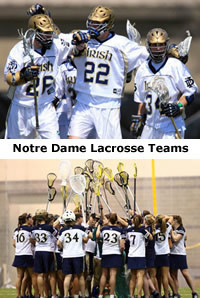 University of Notre Dame graduate John Arlotta, chairman, president and chief executive officer of Denver-based Coram Inc., and his wife, Bobbie, have pledged a lead gift toward a new lacrosse stadium to be built to the east of the Joyce Center as part of the Universitys new athletics quadrangle. The Arlottaschildren – Mindy, Andy and Jon – also have pledged an additional gift from The Arlotta Family Foundation toward the project.

The lacrosse stadium, to be named Arlotta Stadium, is expected to be a $5 million project. Construction will begin once it is fully funded and architectural design plans are available. Conceptual plans suggest a 3,000-seat, lighted stadium that would include an artificial-turf field, locker rooms, restrooms and concession areas.

Were thrilled and grateful that the Arlottasgift will significantly enhance the positioning of our lacrosse programs at Notre Dame,said Kevin White, the Universitys director of athletics.Both our mens and womens programs already are nationally competitive – and a new, top-quality facility will further their abilities to attract the very best student-athletes in the sport of lacrosse.

The lacrosse project is part of the long-term athletics facilities master plan that ultimately will add a new softball stadium (groundbreaking took place last month on that facility), new stadiums for lacrosse, soccer, track and field and tennis, and three relocated football practice fields (one of them artificial turf), all in the area east and southeast of the Joyce Center. The University is actively seeking additional contributions for all of these projects.

The Arlottas said the reason for their gifts in support of the Irish lacrosse programswas a combination of things. We absolutely fell in love with the game while living inBaltimoreand,when considering how we could share some of our blessings and good fortune with Notre Dame, we concluded that the lacrosse programs met three critical goals that we had established for our gift to the University.

It was a bonus that (head coaches) Kevin Corrigan and Tracy Coyne and their respective coaching staffs are wonderful people who have built their programs from scratch. Helping them add the final piece to their puzzle, and compete each year for a national championship, is very exciting for our entire family.

Arlotta is a 1971 graduate of Notre Dame who majored in marketing with a minor in transportation management. He also was an Army ROTC graduate and is a retired captain in the U.S. Army Reserves. He and his wife, the former Bobbie Dooney, currently reside inDenverandMilwaukeeand, in addition to their three children, have two grandchildren, Devin and Riley.

Coram Inc. is a privately held provider of home infusion and specialty pharmacy services with $500 million in revenues. Prior to Coram, Arlotta served as chairman, president and CEO of NeighborCare Inc., a Baltimore-based public company with annual revenues of $1.6 billion. NeighborCare was in the business of providing pharmaceutical products and services to nursing homes. Arlotta joined NeighborCare in July 2003, and took the company public in December of that year. Shortly after going public, NeighborCare became the target of a hostile takeover attempt by its largest competitor, and the company was ultimately sold in July 2005.

Prior to NeighborCare, from 1995 to 2000, Arlotta was president and chief operating officer of Caremark Rx as well as the president of Caremarks specialty biotech drug distribution business. Caremark was a publicly traded pharmacy benefit management company with revenues that grew from $1 billion to $6 billion during his tenure.

From 1986 to 1996, Arlotta was chairman, president and CEO of HealthCall Corp., a Milwaukee-based distributor of durable medical equipment and consumable medical supplies for home health care. He started his health care career in 1971 at Chicago-based Baxter International. In 15 years at Baxter, he held a variety of sales, marketing and general management positions. While at Baxter, he started one of the countrys first home-care companies, providing intravenous therapy to chronically ill patients.He is a recipient of the prestigious Baxter Distinguished Salesman Club Award.

Bobbie Arlotta, aPhiladelphianative, is a former high school lacrosse and field hockey player. AUniversityofDelawaregraduate, she had a distinguished 18-year career in sales and marketing management at Independence Blue Cross inPhiladelphia.

Mindy (Arlotta) Nelson is a social worker and a graduate of the University of Wisconsin-Milwaukee. Her husband, Eric Nelson, is a police officer and a graduate ofOhioUniversity. They have two children, Devin, 5, and Riley, 2, and reside inCincinnati.

Andy Arlotta is a graduate ofNorthernIllinoisUniversityand currently is a national account manager with Managed Healthcare Associates. He is a former college wrestler who now lives inOrlando.

Jon Arlotta also is a graduate ofNorthernIllinoisUniversityand is a director of account services for CVS/Caremark. He is a former college football player who now resides inPhiladelphia.

The Arlottasgift is a component of the $1.5 billionSpirit of Notre Damecapital campaign. Announced last month, the campaign is the largest such endeavor in the history of Catholic higher education.