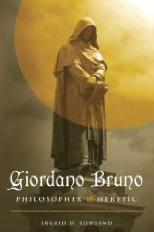 Ingrid Rowland, professor of architecture at the University of Notre Dame, is the author of a new book that presents philosopher Giordano Bruno as a true visionary in early modern Europe.

“Giordano Bruno: Philosopher/Heretic,”recently published by Farrar, Straus and Giroux, establishes Bruno as a peer of Erasmus, Shakespeare and Galileo and reveals a powerful thinker whose view of the world prefigures ours. Rowland traces Bruno’s wanderings throughout 16th century Europe, culminating when Bruno’s ideas about the infinity of the universe attracted the attention of the pope, Queen Elizabeth and the leaders of the Inquisition who eventually condemned him to death in Rome in 1600.

Rowland currently resides in Rome, where she teaches third-year Notre Dame architecture students. She writes and lectures on classical antiquity, the Renaissance and the age of the Baroque for general as well as specialist readers. A frequent contributor to the New York Review of Books, Rowland is the author of"The Culture of the High Renaissance: Ancients and Moderns in Sixteenth-Century Rome,""The Scarith of Scornello: A Tale of Renaissance Forgery,"and"From Heaven to Arcadia,"a collection of essays.

Rowland earned her bachelor’s degree in classics from Pomona College, and both a master’s degree in Greek literature and doctorate in classical archeology from Bryn Mawr College. She has been a Fellow of the American School of Classical Studies at Athens, the American Academy in Rome, the Villa I Tatti in Florence, and the Getty Research Institute in Los Angeles.