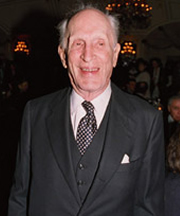 The University of Notre Dame School of Architecture has selected Henry Hope Reed, a spokesman for the cause of tradition in civic design, as the inaugural recipient of a $25,000 award named in his honor.

The Henry Hope Reed Award for the promotion and preservation of classical civic art will be presented March 19 (Saturday) at the University Club of Chicago in conjunction with the presentation of Richard H. Driehaus Prize for Classical Architecture. Quinlan Terry was announced last week as the recipient of the $100,000 Driehaus Prize.

Richard H. Driehaus, the founder and chairman of Driehaus Capital Management in Chicago, established the Henry Hope Reed Award to recognize outstanding contributions to the welfare of the traditional city and its architecture. The award will be presented annually through the Notre Dame School of Architecture, a national leader in incorporating the ideals of traditional and classical architecture into the task of modern urban development.

For half a century, Reed has promoted classical traditions in architecture and its allied arts by educating the public about the importance of grandeur in the design of monuments and institutional buildings.

In 1959, Reed published the popular book, “The Golden City,” drawn from his experiences as a lecturer in Yale Universitys Department of Urban Planning, his research on architecture and urbanism, and his walking tours of Manhattans historic architecture. During the 1960s, Reed served as the first curator of New York City parks. In 1968, he co-founded Classical America, an organization committed to a resurgence of the grand tradition in American design. Classical America joined forces with The Institute of Classical Architecture in 2004.

Reed is the author of several books, including “The New York Public Library: Its Architecture and Decoration” and “The U.S. Capitol: Its Lesson for Today.”