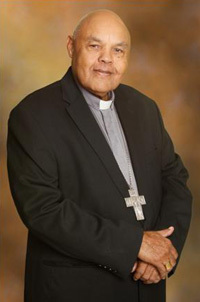 Archbishop of Cap-Haitien Louis Kébreau will be awarded the 2011 Notre Dame Prize for Distinguished Public Service in Latin America at a ceremony in Cap-Haitien on Dec. 8 (Thursday).

Presented annually since 2000 by the University of Notre Dame with support from The Coca-Cola Foundation, the Notre Dame Prize recognizes the efforts of visionary leaders to enhance the region’s welfare by strengthening democracy and improving life for its citizens.

In his more than 35 years in service to the Catholic Church and the people of Haiti, Msgr. Kébreau has distinguished himself by his dedication to public service and social justice and his focus on education, even in the face of physical threats.

“When you build a school, you close a prison,” he says, contending that civic education is vital to democratic citizenship.

“Throughout his career, Archbishop Kébreau has advocated for the poor and dedicated himself to promoting opportunities for Haitian children to have access to quality education,” said Rev. John I. Jenkins, C.S.C., president of Notre Dame. “In the wake of the 2010 earthquake, he has been instrumental in helping Haitians rebuild damaged churches and schools while ministering to their physical and spiritual needs. He is richly deserving of the Notre Dame Prize for Distinguished Public Service in Latin America.”

Under Msgr. Kébreau’s leadership, the Haitian Church has acted with impressive zeal since the earthquake, uniting behind a “one Church response” for rebuilding and recovery.

Working with the U.S. Bishops Conference and Catholic Relief Services, he helped create and now oversees the Program for the Reconstruction of the Church in Haiti (PROCHE), which is responsible for the coordination, construction quality and transparency of Church rebuilding efforts in Haiti.

He has exercised vision in advocating for a coordinated national strategy for rebuilding and improving Catholic schools, which are a vital source of quality education in Haiti.

“Msgr. Kébreau has been an advocate for the homeless, the needy and the less fortunate; he is not afraid to take a stand for justice nor is he afraid to confront the evils of Haiti with a holy anger,” says Caleb E. Lucien, president of Hosean International Ministries and past president of the Pignon Rotary Club.

The Archbishop has spoken out for the homeless victims of the earthquake, calling on the world’s governments, international organizations and nongovernmental aid agencies to follow through on their promises of assistance. He has publicly insisted that the origins of Haiti’s deadly cholera epidemic be investigated and made public, so that future outbreaks can be prevented in Haiti and other disaster zones around the world.

Born in Jeremie, Haiti in 1938, Msgr. Kébreau trained as an agronomist in the Dominican Republic, professed at the age of 25, and was ordained as a Salesian priest in 1974. He directed a Salesian school in Petion-Ville for 12 years and from 1987 to 1996 served as the president of the Episcopal Commission on Catholic Education.

He has served as president of the Haitian Conference of Catholic Bishops since 2005 and was appointed Archbishop of Cap-Haitien in 2008.

“With firm moral and spiritual authority, Archbishop Louis Kébreau has shown effective leadership at the national and local levels,” says Archbishop Bernadito Auza, the Apostolic Nuncio to Haiti. “As President of the Haitian Conference of Catholic Bishops, he has led the Church in its efforts to better the lives of many Haitians, in particular in the fields of education and health, and to promote harmonious relations with the state and society.”

The Notre Dame Prize for Distinguished Public Service in Latin America is administered by the Kellogg Institute for International Studies at Notre Dame with funding from The Coca-Cola Foundation. The award carries a $15,000 cash prize, with a matching amount donated to a charitable organization recommended by the laureate. 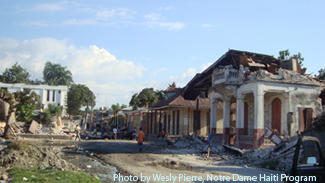 Upon the recommendation of Msgr. Kébreau, the matching prize will be donated to the educational efforts of Action et Solidarité contre la Pauvreté (Action and Solidarity against Poverty, or ASAP), which gives scholarships to university students in Cap-Haitien who cannot pay their educational expenses.

The Kellogg Institute centers its research and teaching on two themes critical themes to contemporary society—democracy and human development. Building on a core interest in Latin America, the Institute fosters research on many regions of the world.

The Coca-Cola Company is the world’s largest beverage company, refreshing consumers with more than 500 sparkling and still brands. With an enduring commitment to building sustainable communities, the company is focused on initiatives that reduce its environmental footprint, support active, healthy living, create a safe, inclusive work environment for its associates, and enhance the economic development of the communities where it operates. Together with its bottling partners, it also ranks among the world’s top 10 private employers with more than 700,000 system employees.