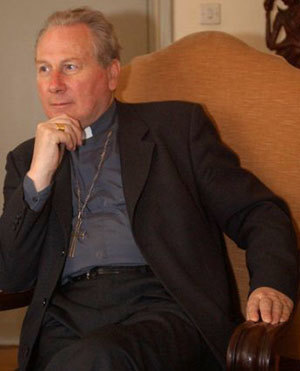 Archbishop Michael Fitzgerald will give a public lecture commemorating the 50th anniversary of the publication of the Second Vatican Council document “Nostra Aetate” at 5 p.m. Thursday (April 23) in Geddes Hall’s Andrews Auditorium at the University of Notre Dame.

Archbishop Fitzgerald’s lecture, “The Church and Islam 50 Years after Nostra Aetate,” will focus on the influence “Nostra Aetate,” the Council’s pivotal declaration on non-Christian religions, has had on relations between Christians and Muslims.

Archbishop Fitzgerald, a member of the Society of Missionaries of Africa, was the papal nuncio to Egypt and delegate to the Arab League from 2006 until his retirement in 2012. He also has served as secretary and president of the Pontifical Council for Interreligious Dialogue. Before his Vatican service, Archbishop Fitzgerald served on the faculty of Makerere University in Kampala, Uganda, where he taught courses on Islam to Muslim as well as to Christian students. A strong advocate of interreligious dialogue, he is widely considered the Catholic Church’s leading expert on Islam.

Archbishop Fitzgerald’s lecture is sponsored by the Berner Lecture Series in the Department of Theology as well as by the Institute for Church Life, and is a feature of the 2015-16 Notre Dame Forum, “Faith, Freedom and the Modern World: 50 Years after Vatican II.”