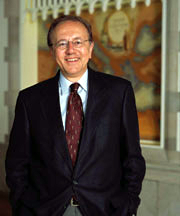 Panos J. Antsaklis, the H.C. and E.A. Brosey Professor of Electrical Engineering at the University of Notre Dame, has been named the 2006 recipient of the Brown Engineering Alumni Medal.

Established in 1997 as part of the sesquicentennial celebration of engineering atBrownUniversityinProvidence,R.I., the award is presented to alumni/ae who have demonstrated exceptional accomplishments in their engineering careers. Antsaklis earned both his masters and doctoral degrees from Brown. He also served as a faculty member at Brown, as well as atRiceUniversityandLondons Imperial College of Science, Technology and Medicine, prior to joining the Notre Dame faculty in 1980.

Made of silver and designed by Walter Feldman, a professor of art at Brown, the alumni medal will be presented this month during Browns commencement weekend.

In addition to his teaching duties in electrical engineering, Antsaklis is a concurrent professor in the Department of Computer Science and Engineering. He also served as the director of the Universitys Center for Applied Mathematics from 1999 to 2005.

Antsaklisresearch interests are in the areas of control and automation, with an emphasis on the design of engineering systems that exhibit a high degree of autonomy. His recent work focuses on network embedded systems and addresses problems in the interdisciplinary research areas of control, computing and communication networks and hybrid and discrete event dynamical systems.

An Institute of Electrical and Electronics Engineering (IEEE) fellow, Antsaklis is a distinguished lecturer and former president of the IEEE Control Systems Society (CSS). He currently serves in several capacities with a number of professional societies, including the presidency of the Mediterranean Control Association and as scientific advisory board member for the Max-Planck-Institut for Dynamik Komplexer Technischer Systeme inMagdeburg,Germany. He also works on the editorial boards of a variety of journals, including the Journal of Discrete Event Dynamic Systems and the IEEE Transactions on Automatic Control.

Antsaklis has more than 300 technical publications to his credit, has co-authored the graduate textbookLinear Systems,has published two research monographs on the supervisory control of discrete event systems using Petri nets and has edited six books on hybrid systems, intelligent control and network embedded sensing and control. He also has been the guest editor for several special issues of hybrid and networked control systems in the Proceedings of the IEEE and the IEEE Transactions on Automatic Control.

Antsaklis is the recipient of a number of professional honors, including a Fulbright Award, the IEEE Distinguished Member Award of the CSS, an IEEE Third Millennium Medal and Notre Dames John A. Kaneb Award for Excellence in Teaching and Curriculum Development.