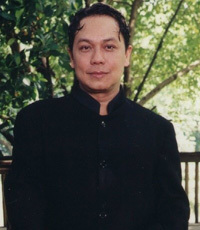 Spending a lunch hour with him will do nothing but confirm that assessment.

After Sept. 11th, the realities of the world are so complex,Juan says.Where is our place in the theatre? [How can we] . . . inform the world?

We must state an urgent case,he continues, punctuating his conviction with a light pound of his fist to the table.

Juan, who holds an appointment as a tenured professor and FTTs theater director, is known internationally for his work that often challenges convention. In recognition of his contributions to the arts, he has been knighted twice by the French government, receiving the Chevalier de lOrdre des Arts et Lettres in 1992 and the Chevalier de lOrdre National de Merit in 2002.

In an increasingly polarized world, he views theater as a way to help people understand that just because they experience the world one way doesnt mean everyone else sees it in the same light.

That bottle is thrown [away] here,he says, pointing to a plastic juice bottle being bussed at another table.That would be made into a vase in another country.

Juan is a native of the Philippines and most recently taught at the University of the Philippines in the Department of Speech Communication&Theater Arts. An independent nation since 1898, the Philippines is home to a wide-ranging dramatic tradition that melds indigenous ritual dating to the 14th century with Catholic, Spanish and American influences that came from nearly 400 years of colonization. It was within the context of this tradition that Juan began pursuing his career, writing his first play while in high school and hanging out with a group of classmates who also became successful theater professionals.

It seemed like we didnt just do it because we were in high school, doing it for a hobby,Juan says.It seemed like at that time we really had a vision, and so this group of then-young actors and directors made a mark in Philippine playwriting that new emerging playwrights should be heard.

Juan was directing professionally at 17, and by the time he was 21, he hadtaken to the streetsto do theater work with out-of-school youth. Shortly after Philippine President Ferdinand Marcos declared martial law in 1972, Juan was directing a production of “Marat/Sade,” which depicts the murder of French Revolutionary Jean-Paul Marat. His curriculum vitae testifies to the realities of the period by simply stating:Military closes theater after first performance.

Seeking new ways to create material that would show the injustices of the dictatorial government, Juan turned to an alternative source: the Catholic Liturgy.

Not only I but many others followed along this line because it was the only way for you to be able to speak . . . they [the government] closed my theatre for my doing . . . “Marat/Sade,” but they could not . . . [punish me for] putting on a Passion of Christ, where Christ would symbolize the Filipino people.

Juan would go on to study in France and make several moves between that country and the Philippines. He was in the Philippines in 1985 when, with the dictatorship becoming more oppressive and the economy getting worse, the French government asked him to go to Greece to film a documentary on the Filipino migrant workers there. While in Greece, not only did he earn his doctorate from the University of Athens, but he also worked to establish cultural centers that would allow Filipinos to convey their culture to the Greeks. It was also during this time, in 1986, that Marcos fell from power.

In 1997, Juan received an Alexander Onassis International Award for Theatre, an honor conferred by the president of Greece. Today, he is artistic director of the Step of Angels Theatre, which he co-founded and is housed in the East-West Arts Center in Athens. His play “Taong Grasa” was performed last year by the Theatre Company Rinkogun in Tokyo and he currently is working with Notre Dame’s International Study Programs to launch a new course in Greece on classical and contemporary Greek theater, where students will receive exposure to amateur theater and Greek theaters and temples.

Whether working with professionals or students, Juan expects his actors to approach their roles with humility and not to presume their actingstatuswill carry any currency in his show. Before each of his classes at Notre Dame, where his first production was “The Laramie Project” last February, he and his students bow to each other in a ritual showing mutual respect.

In Greece, there is a joke about me which is mouthed by professional actors,Juan says.They say . . . that if they join my productions, the first thing they have to learn is the phrase Who are you, and what have you done?

In a practical sense, Juan views his move to the United States and Notre Dame as a way to be closer to his elderly mother who lives in Houston. But he also feels he has a particular calling at the University, one that will allow him to work with students who have tremendous talent but limited exposure to realities encountered in developing nations.

Im here because when I was asked . . . What do you think of Notre Dame?during my interview, I said: I think that Notre Dame students need to be led out into other realities in the world apart from what they know in this little pocket.I was assured [Id be able to do that] . . . so I was perfectly happy with that.

So now Im trying to arrange . . . for students to be brought to the Philippines . . . to experience theater and film and documentation there, where the extremes of pain . . . are so real that, who knows, it may inspire them to do other things.