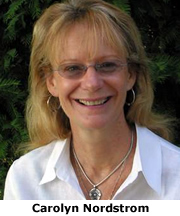 Global Outlaws:Crime, Money, and Power in the Contemporary World,by University of Notre Dame anthropologist Carolyn Nordstrom, has been published by theUniversityofCalifornia Press.

A product of three years of intensive research in the field, Nordstroms book examines the illegal means by which weaponry, drugs, diamonds, oil, food and more exotic merchandise are internationally traded.Her research included travel to dangerous and often violent areas of theUnited States,Africa,EuropeandAsia, as well as numerous interviews with a wide variety of authorities ranging from war orphans to war profiteering capitalists.

The book already has been widely praised for the unprecedented scope and depth of Nordstroms research.One reviewer, Moises Naim, editor-in-chief of Foreign Policy magazine, called ita revealing book about a global trend whose importance is still far from being fully recognized.

A member of the Notre Dame faculty since 1997, Nordstrom also is a fellow of the Kellogg Institute.Her principle scholarly interest is the anthropology of war and peace with a focus on the epicenters of conflict and peace-building in the contemporary world.She alsois the author of thebooksShadows of War: Violence, Power, and International Profiteering in the Twenty-First Century;Fieldwork under Fire: Contemporary Studies of Violence and Culture; andA Different Kind of War Story.