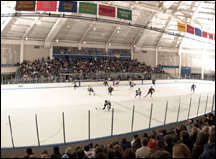 The University of Notre Dame has received a $15 million gift from an anonymous donor to underwrite construction of a permanent ice arena in the Joyce Center.

Tentative plans call for a $25 million to $30 million stadium that would create a new home for the Notre Dame hockey team in the Joyce Center fieldhouse. The project would include improved team and fan facilities, such as locker rooms, concessions, restrooms, and an increase in seating capacity within a dedicated space in the fieldhouse. The current facility, which has been home to the Fighting Irish since the Joyce Center opened in 1968, has bench seating for 2,713.

We are most appreciative of the generous gift weve received for the hockey project,said Notre Dame athletics director Kevin White.

Since the Joyce Center opened in the late 1960s,he added,weve always treated the building as a multipurpose facility based on the many other events, a number of them non-athletic in nature, that have taken place in the fieldhouse. Our intention with this gift and this project is to make a full-fledged commitment to a permanent home for our hockey team. This plan, combined with the tremendous success coach Jeff Jackson and our team have had on the ice, should make for many great days ahead for Notre Dame hockey.

Once funding is complete, the University will work with architects to create a specific design for the facility, as well as a construction timeline. In accordance with University policies for new construction, work will begin after the project is fully funded and designed. The University is actively seeking additional contributions.

Notre Dame is coming off the most successful season in its hockey history in 2006-07 – a first-ever Central Collegiate Hockey Association regular-season title, a first-ever CCHA Tournament title, its second NCAA Tournament appearance (and its first win at the NCAA level) – and a final 32-7-3 record. The Irish spent the final seven weeks of the regular season ranked No. 1 in the country in the various hockey polls.

The Joyce Center was dedicated in December 1968 as the Athletic and Convocation Center. It was renamed in 1987 in honor of Rev. Edmund P. Joyce, C.S.C., Notre Dames executive vice president and chair of the Faculty Board on Athletics from 1952 to 1987.

The south side of the double-domed facility features the arena for the mens and womens basketball and the womens volleyball teams, as well as a variety of other facilities. In addition to the hockey team, the fieldhouse in the north dome serves as an all-purpose sports and events center and is home to the Irish fencing teams. The Rolfs Aquatics Center was added to the back of the building in 1985.

The athletic department administrative offices and most coachesoffices are located in the building, and the second-level concourse includes the Monogram Room and exhibits of Irish sports memorabilia.

The Joyce Center also is the site for the Universitys annual Commencement exercises, special Masses, concerts, speeches, alumni reunion and other gatherings, and business and convention activities.

The gift for a hockey facility is a component of the $1.5 billionSpirit of Notre Damecapital campaign. Announced in May, the campaign is the largest such endeavor in the history of Catholic higher education.