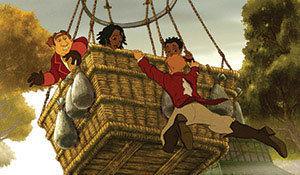 The four-day (July 24-27) ANDkids World Film Festival features a variety of live-action, animation, shorts and feature films. New this year, each film will be introduced by children from the community. The introductions are based on brief reviews that the children wrote after screening advance copies of the films shown at the festival.

To kick off the event this year, Third Coast Percussion will perform a live accompaniment to the 1906 Pathé Frères’ silent film “Invisible Men,” which is about a wizard and his partner who create a potion that makes them invisible. An improvisational performance to accompany Albert Lamorisse’s 1956 classic “The Red Balloon” will follow. Third Coast Percussion, a Chicago-based quartet, assumed the position as ensemble-in-residence at the University of Notre Dame in June. The evening starts at 7 p.m. at the DeBartolo Performing Arts Center on campus.

On Thursday and Friday (July 25 and 26), children will be able to participate in the free Foley Workshop in the Penote Performers Assembly at DeBartolo. Kevin Krizmanich, cinema production assistant, will show how Foley artists – film industry professionals who create sound for movies – do their work. Children who attend will learn how to make a bird chirp, a car rev and a dinosaur roar.

All screenings and events are free and open to the public, but most require tickets, which may be reserved by calling the ticket office at 574-631-2800 or visiting the website at performingarts.nd.edu.

The festival is supported by the Lauran E. and Justin L. Tuck Endowment for Children’s Programming and by WNIT Public Television. For more information, visit the DeBartolo Performing Arts Center website at performingarts.nd.edu.