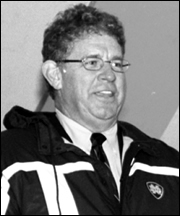 John W. “Jay” Jordan II, a 1969 alumnus of the University of Notre Dame and a member of its Board of Trustees, is making a $40 million gift to the University, it was announced today at the annual winter meeting of the Trustees on campus.

The gift by Jordan, the latest in a series of donations to Notre Dame by the Chicago-based businessman, is the second largest ever received by the University and establishes Jordan as the most generous benefactor in Notre Dame history. The purpose of the gift is as yet undesignated.

Jordan is also the principal benefactor for the $70 million Jordan Hall of Science, currently under construction on the eastern edge of the campus.

Rev. Edward A. Malloy, C.S.C., president of the University, said, “This is an extraordinary gift from a man whose generosity will forever be a legendary part of Notre Dames heritage.”

Rev. John I. Jenkins, C.S.C., who in July will succeed Father Malloy, noted the past gifts by Jordan and said, “Jays unselfish devotion to his alma mater is remarkable. The commitment and insight that he brings to our Board of Trustees is a source of inspiration to all of us at the University. He can take great comfort in considering the generations of Notre Dame students who will reap the benefits of his contributions in so many ways.”

The surprise announcement of the gift at the Board of Trusteesmeeting in McKenna Hall was greeted with prolonged applause and expressions of gratitude.

Jordan is the founder of the Jordan Company (TJC), a private investment firm that acquires, manages and builds companies for the TJC partnership account, and is chairman and chief executive officer of the Chicago-based holding company Jordan Industries Inc.

Jordan Hall, for which ground was broken in November 2003, is scheduled for completion in the summer of 2006. It will include 40 undergraduate laboratories for biology, chemistry and physics; two 250-seat lecture halls; a 150-seat multimedia lecture hall; two classrooms; 22 faculty offices; offices for preprofessional (pre-med) studies; and a greenhouse, herbarium and observatory. Jordan previously funded construction of the Jordan Auditorium in Notre Dames Mendoza College of Business and has played a leadership role in supporting numerous other initiatives on campus. He is chair of the Board of TrusteesInvestment Committee, which oversees the University endowment, and a former chair of the Finance Committee.

Jordan was elected to the Board of Trustees in 1993. Previously, he was a member of the Advisory Council for the College of Business, serving as its chair for four years.