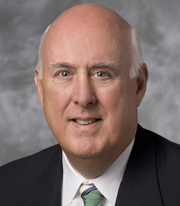 Kenneth Stinson, chairman of Peter Kiewit SonsInc., one of the largest construction firms in theUnited States, was elected May 5 to the Board of Trustees of the University of Notre Dame.

A 1964 Notre Dame graduate with a bachelors degree in civil engineering, Stinson served as an officer in the U.S. Navy Civil Engineering Corps from 1966 to 1969, including three tours inVietnamwith the Navy Seabees.

After earning his masters degree in civil engineering from Stanford University in 1970, Stinson joined Kiewit and worked for 12 years in engineering and management positions on large projects across the country, including the 63 rd Street Tube and Tunnel in New York City, the Fort McHenry Tunnel in Baltimore, and the Pasco-Kennewick cable-stayed bridge and the I-205 bridge, both over the Columbia River in Washington state.

Stinson moved to Kiewits corporate headquarters inOmaha,Neb., in 1982 as corporate vice president of marketing. He served in positions of increasing management responsibility, and in 1992 was appointed chairman and chief executive officer of Kiewit Construction Group. He became chair and CEO of the parent company in 1998, serving in both positions until last year, and since then as board chairman. Founded in 1884, Peter Kiewit SonsInc. is the nations seventh-largest construction firm with 2005 revenues of $4.15 billion.

Stinson has been a member of the advisory council of Notre DamesCollegeof Engineering since 1996. He serves on the boards of ConAgra Foods Inc. and Valmont Industries Inc. and is a member and past chair of the Construction Industry Roundtable, a professional association of 199 chief executive officers from the leading architectural, engineering and construction firms in theUnited States.

Stinson also is active in civic affairs, serving as chair of theNebraskaMedicalCenterand the Omaha Symphony, and on the boards of several other organizations, including the Omaha Chamber of Commerce,CreightonUniversityandGirls&BoysTown.

Notre Dames Board of Trustees was established in 1967 and currently is chaired by Patrick F. McCartan, senior partner of the international law firm Jones Day. The election of Stinson brings the boards membership to 53.