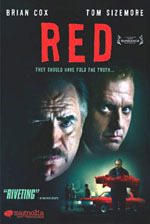 Screenwriter Stephen Susco, a 1995 graduate of the University of Notre Dame, will screen his new film,“Red,”on Dec. 11 (Thursday) at 7 p.m. in the Browning Cinema of Notre Dame’s DeBartolo Performing Arts Center.

Susco’s visit is part of the new iNDustry Alliance Alumni Filmmaker Series, sponsored by Notre Dame’s Department of Film, Television, and Theatre, the performing arts center and Alumni Association. The series brings alumni directors, producers, screenwriters and actors back to campus to screen their recent feature films and documentaries.

Written by Susco and directed by Trygve Allister Dieson and Lucky McKee,"Red"was a 2008 Sundance Film Festival entry. It tells the story of an older, reclusive man whose best friend and inspiration for living is his 14-year-old dog named Red. When three teenagers kill the dog without reason, the bereaved sets out for justice and redemption by any means.

Admission to the screening of"Red"is $6 for the general public, $5 for faculty and staff, $4 for seniors and $3 for all students. Ticket information is available at the performing arts center box office or by calling 574-631-2800 or at http://performingarts.nd.edu on the Web.