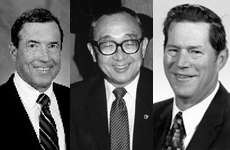 The University of Notre Dame Alumni Association will present three awards during Reunion 2006 ceremonies on campus Thursday to Saturday (June 1 to 3).

 F. Michael Geddes, a 1961 graduate and member of the Universitys Board of Trustees, will receive the Rev. Edward F. Sorin, C.S.C., Award.Named in honor of Notre Dame’s founder, the Sorin Award is presented annually to a graduate who has embodied “the values of Our Lady’s University” in his or her service to community.

A University Trustee since 1996, Geddes is a member of the Athletic Affairs and Audit Committees, former chair of the Executive Committee and current chair of the Badin Guild, which honors individuals who include the University in their estate plans.He has served on the advisory council of the Institute for Church Life since 1983, formerly as chair and now as an ex officio member.

Geddes, who was graduated from the Harvard Graduate School of Business Administration in 1963, is chairman and president of Geddes and Company, a private investment and consulting firm in Phoenix, and is chairman and chief executive officer of Coe&Van Loo Consultants Inc., Athearn Inc., and GS&B Holdings Inc.He serves as chairman of the board of Scottsdale Healthcare and on the Executive Committee of the Board of Directors of the Deans Council of 100 at Arizona State Universitys W.P. Carey School of Business.In addition, he is director of both Boys Hope Girls Hope of Arizona and the St. John Vianney School Development Council, and former chair of the Catholic Community Foundation of the Diocese of Phoenix.

 The Rev. John Cardinal O’Hara, C.S.C., Award, which recognizes distinguished service to the University by a former employee, will be presented to Francis M. Kobayashi, who received his bachelors, masters and doctoral degrees from Notre Dame and went on to serve the University as a professor, researcher and administrator.

A professor emeritus of aerospace and mechanical engineering, Kobayashi retired a decade ago as assistant vice president of the Graduate Schools research division.From 1948 to 1968 he taught and conducted research on solid and fluid mechanics and systems engineering, including wave resistance of ships and the dynamics of submerged vehicles.

Kobayashi served as an assistant director at the National Science Foundation and was a member of the Indiana Lieutenant Governors Science Advisory Committee.A recipient of the Universitys Presidential Award and Student Governments Faculty Service Award, Kobayashi served on numerous University committees, including the Research Council, Science Development Committee, Faculty Senate, Engineering College Council, and the Committees for Research and Sponsored Programs and Protection of Human Subjects.In addition, he was a consultant and member of many National Science Foundation programs, as well as a consultant for Studebaker Corporation and Bendix Corporations products and missile divisions.

 Assistant athletics director Brian Boulac, who received his bachelors and masters degrees from Notre Dame, will receive the James E. Armstrong Award, presented to a current University employee in recognition of outstanding service.

Boulac, general manager of the Joyce Center, has served Notre Dame and its athletics program for more than four decades as a player, coach and administrator.A Monogram Club member, he has coached football, fencing and womens softball, which he guided to four 30-win seasons, including Midwestern Collegiate Conference (MCC) tournament titles in 1990 and 1991 and a regular-season title in 1992.He was named MCC coach of the year in 1989.

Boulac spent the last seven years of his football coaching career as the recruiting coordinator, in addition to coaching the offensive and defensive lines, receivers and special teams.He served as administrative assistant to coach Dan Devine and assistant head coach for Gerry Faust and was the offensive line coach for Notre Dames 1973 and 1977 national championship teams.He was a member of the coaching staff for eight seasons that culminated in postseason bowl appearances, including Irish victories in three Cotton Bowls, one Orange Bowl and one Sugar Bowl.A three-year member of the football team, Boulac earned monograms in 1960 and 1961.