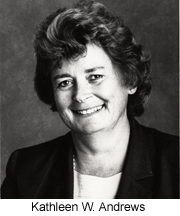 The University of Notre Dame Alumni Association will present three awards during Reunion 2004 ceremonies on campus Friday and Saturday (June 4 and 5).p. Kathleen W. Andrews, the first woman elected a Fellow of the University, will receive the Rev. Edward F. Sorin, C.S.C., Award. Named in honor of Notre Dame’s founder, the Sorin Award is presented annually to a graduate who has embodied “the values of Our Lady’s University” in his or her service to community.p. A member of Notre Dame’s Board of Trustees, Andrews became the first woman fellow in 1996. She has served on the advisory council for the University’s Institute for Church Life and is a member of Notre Dame’s Ireland Advisory Council. In 1981 she established the Andrews Memorial Scholarship Fund, which underwrites student summer service internships, in memory of her late husband, James F. Andrews, a 1961 graduate.p. A 2003 honorary degree recipient who holds a master’s degree from Notre Dame, Andrews also serves on the Board of Trustees of Rockhurst University in Kansas City, Mo., and is a director of the Association of Governing Boards of Universities and Colleges in Washington, D.C. In addition, she is vice chair of Andrews McMeel Universal and a director of its foundation.p. The Rev. John Cardinal O’Hara, C.S.C., Award, which recognizes distinguished service to the University by a former employee, will be presented to Sister Elaine V. DesRosiers, O.P., who served for 21 years as Notre Dames director of educational media. She played an integral role in the development of DeBartolo Hall, which is recognized as one of the most technologically advanced learning centers in higher education.p. A graduate of Boston University, with a doctorate in educational media and technology, Sister DesRosiers also holds a bachelor’s degree from Spalding University and a master’s degree from Notre Dame. She entered the Dominican Sisters of St. Catharine, Kentucky, in 1948, and professed her final vows in 1953.p. Dr. Raymond T. Holden, a 1926 graduate and celebrated World War II physician, who studied chemistry under Knute Rockne and recently celebrated his 100th birthday, will be honored in absentia with the Distinguished Alumnus Award.p. Among a select few physicians to achieve the rank of admiral in the U.S. Navy, Holden commanded a naval hospital in England during the Second World War. Following the D-Day invasion in 1944, he performed surgery for 38 continuous hours on men returned to England from the Normandy battle.p. Holden earned his medical degree from Georgetown University, where he later served as a faculty member and had the university’s OB/GYN pavilion named in his honor. President of the Washington, D.C., Medical Society for many years, Holden delivered more than 10,000 babies through his active OB/GYN practice.p. Holden studied freshman chemistry at Notre Dame under Rockne, and so impressed the famed professor/coach that he was asked to serve during his sophomore year as laboratory supervisor while Rockne led afternoon football practices.p.